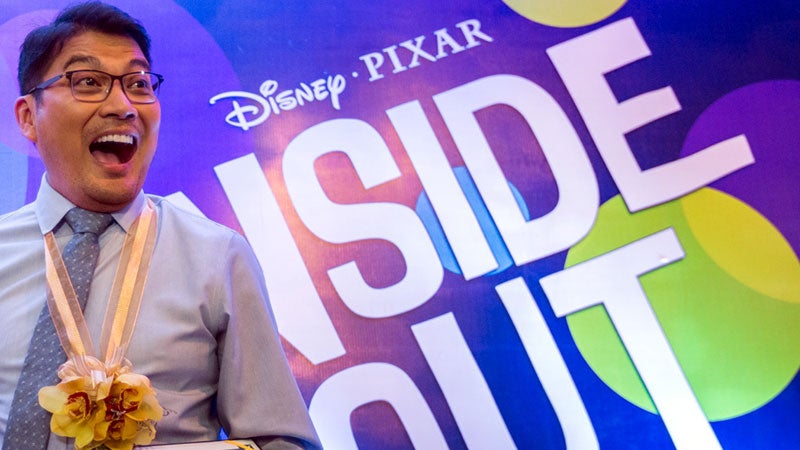 FIRST FOR A PINOY, FIRST FOR LEO Ronnie del Carmen, a University of Santo Tomas alumnus, codirected “Inside Out” that won an Oscar for the best animated feature film. JILSON SECKLER TIU

“I used to daydream as a boy in Cavite City of being here receiving an Oscar and here I am living the dream!” Ronnie del Carmen said backstage at the 88th Academy Awards where “Inside Out,” which he codirected, won the best animated feature prize.

The University of Santo Tomas alumnus has racked up several firsts in his career—including being the first Filipino to codirect a film at Pixar Studios, the animation movie powerhouse, and the first Filipino to earn an Oscar best original screenplay nomination for “Inside Out,” which he shared with Pete Docter, Meg LeFauve and Josh Cooley.

“I am so grateful to be part of this movie, working with Pete Docter and being part of Pixar! This movie would not be made if our champion, John Lasseter (chief creative officer), did not push for it and support it all the way,” he added.

The Cavite City native said that at the Academy’s hot ticket bash after the show, the Governors Ball, and several Oscar after-parties, many admired his tuxedo by Tolentino.

“As an immigrant from the Philippines, I kept my goals modest and stayed realistic,” Del Carmen said about his journey from Cavite to being one of the top animators and storytellers in the United States.

“Because where I come from, we worked so hard for so little back then. So this means so much to our family, for our story,” he added.

“This is for my parents who worked so hard to save us; my country where so many are like me wishing for what seems impossible. For my people in the Philippines, I can tell you—dreams keep you going. Awards or no awards, let this be a point of reference that anyone can dream the impossible. Do the work, be as good as you can be, fail and learn as you go and you’ll get to a grand place where you’ve become the dream.’ Maraming salamat po. Mabuhay!” Del Carmen said.

He added: “I owe all this to my parents, Rogelio and Lilia, and my siblings—Lulu, Rick, Louie and Nancy. But most of all, my love and partner through all challenges, my wife Tess, and the joy and pride of our lives, my children Geo and Gerin.”

Docter and “Inside Out” producer, Jonas Rivera, talked about Del Carmen’s contributions to the movie in the backstage press room at the Oscars.

“Ronnie should be up here, too,” Rivera told the Inquirer. “He should be, absolutely,” Docter chimed in.

“Ronnie is an essential part of the movie,” Rivera said. “He contributed so much to the emotion, the heart of the movie and we are incredibly lucky to work with him.”

Docter acknowledged Del Carmen’s contributions “to this film and to ‘Up,’ our last film. Ronnie is one of the great visual storytellers in animation. He comes proudly from the Philippines, as you know.”

“First of all, I apologize, we are a little bit out of our heads,” Docter said as he replied to the Inquirer about Del Carmen as a reflection of the diverse talent pool at Pixar in a night where diversity—or the lack if it—was the main topic.”

“I mean, you look at all the nominees tonight in animation. There’s a lot of talk about (the lack of diversity). But you see in this category films from around the world, from Japan, Latin America and from good old California. We are proud to be among that group.”

“I think animation leans that way. Ronnie is a great artist who represents that. We create stories that come from everywhere. Someone like Ronnie really brings that to Pixar. We are proud of him and he is definitely sharing this with us.”

The Oscar victory of “Inside Out,” set inside the brain of an 11-year-old, and which has earned acclaim since it debuted in May last year, was an especially sweet moment for Del Carmen. When he was a teenager, his family’s financial misfortune forced him to delay college and take odd jobs.

“I had a rough childhood though many of the early years were idyllic for me,” Del Carmen recounted.

“When the hardships came and hung around for years, we had to make do with whatever fortune brought us. You learned to appreciate a break when it came your way. You’ll never know when fate will turn sour on you. That’s why I work hard and a lot. I like to achieve personal goals which, in the end, is what matters the most,” he said.

He remembers always being interested in drawing and telling stories. “My father read a lot,” he said.

“I just naturally emulated him. I often daydreamed when I was alone. I spun tales of adventures and created sci-fi worlds. When fortunes went bad, I imagined ways that a long-lost relative was going to show up and dig us out of our money-strapped life.”

“My dad was very concerned because my penmanship was horrible in contrast to my drawings. My mom loves to tell stories. She’s the natural storyteller in the family. She can hold court in any gathering for hours on end about family.”

At 16, Del Carmen painted sets and props for Francis Ford Coppola’s “Apocalypse Now,” which was being shot then in the Philippines. He did not meet Coppola but he saw Dean Tavoularis, the Oscar-winning production designer of “Apocalypse Now” and “The Godfather” films.

When he immigrated to the United States, Del Carmen’s talent and hard work helped him rise from various jobs to a position at Pixar, which is based in Northern California.

UST honors Filipino director of ‘Inside Out’