UST honors Filipino director of ‘Inside Out’ | Inquirer Entertainment

UST honors Filipino director of ‘Inside Out’ 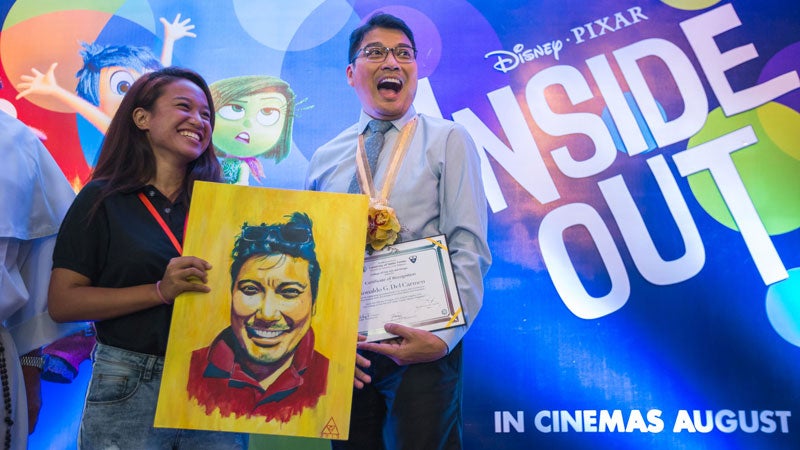 HONORED Ronald “Ronnie” del Carmen, Filipino director and cowriter of the new computer-animated Pixar film “Inside Out,” receives his portrait from a fine arts student of the University of Santo Tomas during a homecoming on his old campus on Monday. PHOTOS BY JILSON SECKLER TIU

The Filipino codirector of the Pixar film “Inside Out”—hailed as one of the best films of 2015—and alumnus of the University of Santo Tomas (UST) College of Fine Arts and Design (CFAD) was honored on his return to his old campus on Monday.

It was at CFAD where Del Carmen earned his Bachelor of Fine Arts degree in advertising in 1985.

Del Carmen returned to UST a successful alumnus, surrounded by students who wanted his autograph and to have photos with him.

The multiawarded animator and comics and book illustrator was welcomed by the officers of the UST office alumni relations at the historic arch on the popular campus.

After a photo shoot, Del Carmen, accompanied by his wife, Tess, and daughter Gerin, proceeded to UST’s landmark main building, where he was received by the vice rector, Fr. Richard Ang.

Del Carmen, who joined Pixar, the world’s preeminent animation studio based in northern California, in 2000, also served as the story supervisor of “Up,” the first animated film to open the prestigious Cannes Film Festival in 2009.

The writer-director of “Dug’s Special Mission,” an animated film released in 2009, was honored with a special program at CFAD’s audiovisual room, which was packed with students.

Fr. Alaurin, Romeo Castro and Adrienne Zacarias, acting dean and college secretary of CFAD, respectively, presented a certificate of recognition to Del Carmen for being an outstanding alumnus.

In his remarks, the Cavite-born awardee reminisced about being one of the “happiest oldest students” at CFAD, referring to his delayed enrollment at UST due to his family’s financial setbacks.

In the question-and-answer segment, Del Carmen stressed the importance of developing drawing skills with pencil and paper instead of learning the latest and sophisticated animation software programs.

He also emphasized the value of effectively telling a story.

An emotionally involved story and the engaging way it is told is one of the hallmarks of Pixar films.

Del Carmen cited the curiosity of Pete Docter, who directed and cowrote “Inside Out” with him, about the workings of an adolescent mind that led to the story of the acclaimed animated film. 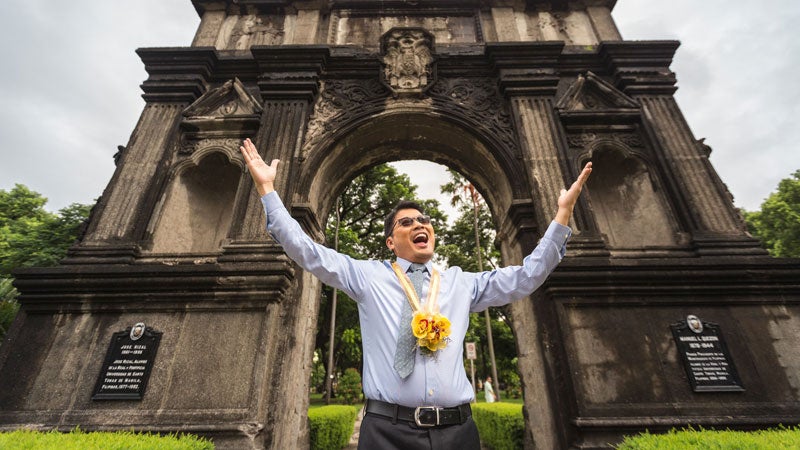 The multiawarded animator behind the success of the animated films “Wall-E,” “Ratatouille” and “Finding Nemo” poses before the university’s historic Arch of the Centuries.

In response to the students’ request, Del Carmen sketched Sadness, one the characters in “Inside Out,” which opens in Manila on Aug. 19.

“I am overwhelmed with emotion and gratitude,” Del Carmen told the Inquirer about being honored by the college where he met his wife.

He said: “I like the work I do and the career I have. It has given me a livelihood and provided for my family. It [was] here in UST that I began to define what kind of artist I can be.”

“I like visiting the campus grounds and seeing these young faces,” added the “Pixnoy” (a Filipino or Pinoy who works at Pixar), whose other credits include “Wall-E,” “Ratatouille” and “Finding Nemo.”

“We were just like them so long ago. Just taking the days as they come and never thinking it possible that one day I’d be receiving an honor from my beloved university for the career I will have. Today, I am eternally grateful and humbled.”

Del Carmen almost did not get to enroll at UST due to lack of funds.

“When I graduated from high school, I had to start working,” he said. “My friends all went to college but I had to work within a week of graduating. The family had lost everything when one of my father’s business partners ran off with their funds. We lost our house and we were left with virtually no money,” he said.

“We ended up living with an aunt and her family in Parañaque,” Del Carmen recalled. “My younger siblings lived with another aunt in Cavite. The work I got did not last and when I did find work, it was not a regular one.”

“Sometimes I did not have money for lunch. My father left for the US on a long shot to get work years later,” he said.

“I stepped into the halls of the UST College of Fine Arts a year after my high school classmates were graduating from college. I was four or five years older than the rest of the freshmen class.”

Del Carmen said it was a dream come true for him to be sharing with Filipinos the animated film he helped create.

“It’s kind of a surreal experience because I just watched movies here growing up,” said the former advertising art director who migrated to the US in 1989 at age 29. He said he loves movies but never expected to be doing films.

He joined Pixar in 2000, and before that worked as a story board artist for “Batman: The Animated Series” and for DreamWorks as a story supervisor.

Del Carmen and director Pete Docter were on the last leg of their Asian tour to promote “Inside Out.” The movie has earned $630 million at the box office so far.

The two directors said they drew from some of their childhood experiences as well as their children’s for the movie they cowrote.

In praise of Fil-Am codirector

‘Inside Out’ captures cacophony of childhood