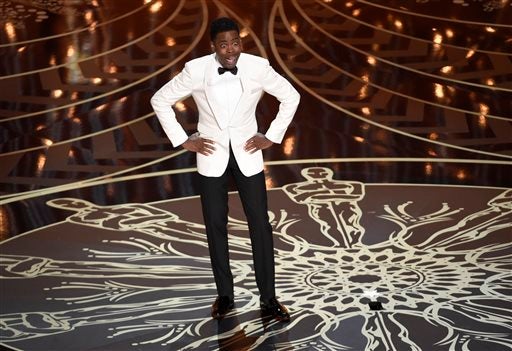 Host Chris Rock speaks at the Oscars on Sunday, Feb. 28, 2016, at the Dolby Theatre in Los Angeles. AP

LOS ANGELES— Hollywood’s diversity crisis has loomed large over awards season and the big question going into the 88th annual Academy Awards was whether it would dominate the ceremony, too. It did, of course, but it wasn’t alone.

The evening turned out to be a platform not just for racial representation in the movies, led by host Chris Rock’s incisive insight and parody, but a wide array of causes, from global warming and bank reform to sexual abuse in church and on campus. It was a subtle plea from the film community that the movies and artists honored at Sunday night’s ceremony did have purpose and meaning — even in this second year of #OscarsSoWhite.

The “Spotlight” team, which won the first and last prize of the night — best original screenplay and best picture — and nothing else, celebrated the Pulitzer Prize-winning work of The Boston Globe journalists who exposed sex abuses in the Roman Catholic Church and the conversation the film has renewed around the world.

Leonardo DiCaprio, the forgone best-actor winner for “The Revenant,” used the platform to talk about his life’s passion outside of acting — climate change, which got a “thank you” from the official White House Instagram account.

Adam McKay and Charlies Randolph, who won for best adapted screenplay for “The Big Short,” spoke about the need for finance reform.

And Pakistani director Sharmeen Obaid-Chinoy, whose “A Girl in the River: The Price of Forgiveness” spoke to the impact of her film.

“This week, the Pakistani prime minister said he would change the law on honor killing of women,” said Obaid-Chinoy, who was also the only female director to win an award at Sunday’s ceremony. “That is the power of film.”

In some ways, the Oscars have always been a place where winners use the podium and their 45 seconds to opine on causes directly or indirectly related to the movies, from Sacheen Littlefeather’s speech about Native American rights 43 years ago to Patricia Arquette’s call last year for pay equality for women.

But perhaps no ceremony has had such a pointed target, and nothing this year could eclipse #OscarsSoWhite, which was woven into the fabric of the show, thanks to Rock. He launched immediately into the uproar over the lack of diversity in this year’s nominees, and didn’t let up, dubbing the show “The White People’s Choice Awards” at the start.

Rock ensured that the topic remained at the forefront throughout the proceedings, usually finding hearty laughs in the process.

In an award show traditionally known for song-and-dance routines and high doses of glamour, Rock gave the 88th Academy Awards a charged atmosphere, keeping with the outcry that followed a second straight year of all-white acting nominees.

Streaks, broken and extended, dominated much of the evening, with an expected best actress win to Brie Larson for her breakout performance in the mother-son captive drama “Room” and a best supporting actress win for Swedish actress Alicia Vikander for the transgender pioneer tale “The Danish Girl.”

Gasps went around the Dolby when Mark Rylance won best supporting actor for Steven Spielberg’s “Bridge of Spies” over Sylvester Stallone. Nominated a second time for the role of Rocky Balboa 39 years later, Stallone had been expected to win his first acting Oscar for the “Rocky” sequel “Creed.”

Alejando Inarritu, whose win for “The Revenant” meant three straight years of Mexican filmmakers winning best director and his second consecutive win, was one of the few recipients to remark passionately on diversity in his acceptance speech.

Talk of election was largely absent from the ceremony, though Vice President Joe Biden was met by a standing ovation before talking about sexual assault on college campuses in an introduction to best-song nominee Lady Gaga.

READ: ‘Son of Saul’ and ‘A War’ in foreign-language Oscar race

Composer Ennio Morricone, at 87, landed his first competitive Oscar for “The Hateful Eight.”

But the wins at times felt secondary to the unflinching host. Rock said he deliberated over joining the Oscars boycott and bowing out as host, but concluded: “The last thing I need is to lose another job to Kevin Hart.”

Down the street from the Dolby Theatre, Rev. Al Sharpton led several dozen demonstrators in protest against a second straight year of all-white acting nominees.

The acting nominees restored “OscarsSoWhite” to prominence and led Spike Lee (an honorary Oscar winner this year) and Jada Pinkett Smith to announce that they wouldn’t attend the show. Several top African American filmmakers, Ryan Coogler (“Creed”) and Ava DuVernay (“Selma”) spent the evening not at the Oscars but in Flint, Michigan, raising money for the water-contaminated city.

Rock also sought to add perspective to the turmoil. Rock said this year didn’t differ much from Oscar history, but that black people earlier were “too busy being raped and lynched to worry about who won best cinematographer.”

In a quick response to the growing crisis, Cheryl Boone Isaacs, president of the Academy of Motion Picture Arts and Sciences, led reforms to diversify the academy’s overwhelming white and male membership.

In her remarks during the show, Boone Isaacs strongly defended the changes, quoting Martin Luther King Jr. and urging each Oscar attendee to bring greater opportunity to the industry.

Last year’s telecast, hosted by Neil Patrick Harris, slid 16 percent to 36.6 million viewers, a six-year low. How the controversy, and Rock’s head-on approach, will affect ratings for the ABC show is the new big questions, not to mention how well the causes of the movies and their artists will live in the conversation beyond Sunday’s show. TVJ