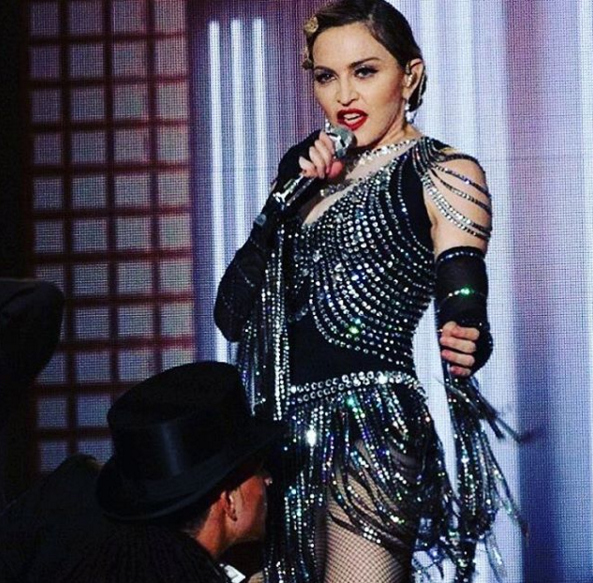 “The Sweet Smell of Success! Get it while it’s hot in Manila,” Madonna said in the caption of the photo she posted in her Instagram.

“NOBODY f**ks with the queen!” cried pop star Madonna during the first of a two-night concert in Manila on Wednesday at the SM Mall of Asia Arena.

At one point during the unapologetically provocative spectacle that was the four-time Grammy winner’s “Rebel Heart” show, she placed on her head a crown handed by an eager fan, as if affirming and reminding everyone of what she still is and always has been for the past 30 years: a queen.

She arrived almost two hours after the front act had ended its set.

Around 10:40 p.m., amid screams and cheers, Madonna was lowered onstage via a suspended cage, as a phalanx of spear-wielding dancers sporting samurai armors below her marched and shuffled in and out of different configurations.

She opened the act with “Iconic,” a song about rising above adversity.

The venue was packed to the rafters with thousands of supporters—many of whom paid as much as P57,000 for a seat closest to the concert stage.

“This is my first time here in the Philippines! Give it up!” said Madonna, who peppered her spiels with a flurry of expletives. “What I want to know is if you are happy that I came.”

A resounding, “f**k yeah,” she said, was what she wanted to hear from the revelers whenever she posed a question.

The concert expectedly pushed the envelope, with the trendsetting superstar dishing out sexually charged numbers and routines that incorporated religious imagery—the kind that would have made the clerics who had earlier gone to the press to denounce Madonna as “evil” squirm.

In “Holy Water,” a song about bodily fluids, crucifixes served as dance poles from which lithe dancers wearing nuns’ veils—and nothing much else—hung upside down and twirled around.

The number that followed, “Devil Pray,” had Madonna writhing lustily on top what was supposed to be the Last Supper table, and, later on, straddling a man dressed as a priest.

She said she did not come all the way to the Philippines for the first time to just sing: “I came to shut this city down!”

For close to two hours, the American singer-songwriter tirelessly danced and worked the stage, which was furnished with a cross-shaped, heart-tipped platform, and armed with elaborate sets of mechanical contraptions and hydraulics to facilitate seamless transitions and awe-inspiring acts worthy of Cirque du Soleil.

At 57, Madonna, whose full name is Madonna Louise Ciccone, was fit and brimmed with vigor, pulling off physically demanding choreography.

“If you did my show, would you be thirsty?” she asked the crowd, before slowing down the show’s frenetic tempo with an acoustic version of “Who’s that Girl?”

She also dazzled with her designer costumes, which matched each of the show’s four themed acts: “Joan of Arc,” “Rockabilly Meets Tokyo,” “Latin Quarter” and “Party.”

Throughout the show, she transformed into a geisha, a matador, a guitar-shredding rocker, a sparkly 1920s flapper.

Mounted by Music Management International, the gig—part of Madonna’s ongoing “Rebel Heart” world tour—featured a set list composed mostly of tracks from her 13th and latest studio album of the same title.

But once in a while, she regaled the adoring crowd with well-loved hits like “Material Girl,” “Like a Virgin” and “La Isla Bonita.”

Madonna likewise surprised everyone when she sang something she has yet to do in this tour—the 1989 chart-topper “Like a Prayer”—easily the night’s most magical moment. The concert’s closing song, “Holiday,” also elicited a joyous response, as Madonna draped a Philippine flag around her during the number.