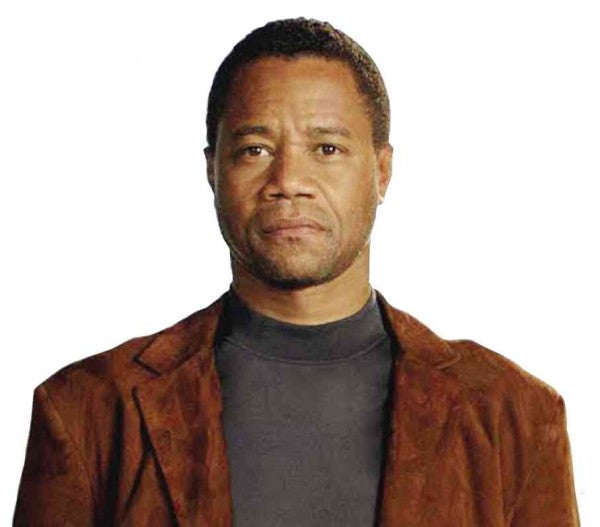 LOS ANGELES—Was OJ Simpson guilty or not guilty? Cuba Gooding Jr. faced that question again as his new FX miniseries, “The People v. OJ Simpson: American Crime Story,” revisits what was called “The Trial of the Century.” The Oscar best supporting actor for “Jerry Maguire” sat down and talked about his biggest and what he said was his “hardest” role in many years.

The 48-year-old actor plays the former football star, broadcaster and occasional actor who was tried for the double homicide of his ex-wife, Nicole Brown Simpson, and her friend Ron Goldman. In almost circus-style proceedings, the trial ended in a “not guilty” verdict, whose impact reverberates to this day.

But in 2008, the athlete nicknamed “The Juice” was found guilty of several felonies, including armed robbery and kidnapping. He is serving his 33-year-sentence in Nevada.

Cuba, memorable for his exuberant Oscar acceptance speech in 1997, was just as energetic in person and gave spirited answers to questions. Excerpts from our interview:

This must have sounded like a daunting role when it was first offered to you. Did you have to be talked into accepting it?

Interestingly enough, my agent had sent me a script of the life of OJ Simpson. It was 167 pages, which is way too long for a screenplay. They said, “This billionaire is doing this movie, and he wants you to play OJ.” I was like, “I’ve been in this situation before, with these guys who have a lot of money.”

This billionaire guy out of Australia’s take was that OJ was innocent—he wanted to tell the story that way. So, I read the script. I said, “I’m just not into it, and I don’t know who’s going to direct it.” Because I’ve gotten to that point in my career where I look to work with real filmmakers. So, I passed on it.

A week later, my agents called me again. They said, “Ryan Murphy wants to meet with you.” I said, “Whatever he wants to do, I’m in.” They go, “You won’t believe it, but he’s telling the OJ Simpson story,” I laughed. I go, “It doesn’t matter; it’s Ryan Murphy.”

So, I met with Ryan without reading anything, because he wouldn’t give me anything to read. He just wanted to meet. We sat for about an hour. Afterward, he sent the pilot script—and here I am. There was never any hesitation about playing such a polarizing figure—a flamboyant guy who fell from grace, who is seen as someone who got away with, you know, something.

To me, it was always about working with Ryan. It was about showing him that I could be the tool he needs to tell this character’s emotional journey. When I found out that we got John Travolta to play Shapiro, then David Schwimmer and all the other wonderful actors who finally signed on, I knew it was going to be a statement piece! I knew everybody was going to step up to the plate and bring his ‘A’ game because of Ryan Murphy.

Has working on this project altered your opinion about the case?

Every day, during the six months that we walked through this journey of those 10 scripts, there was always something that moved me. As I started to sift through the events, personalities and circumstances of what happened, my opinion changed day to day… there were new revelations.

I didn’t feel it was necessary to reach out to OJ Simpson today, because I feel that he’s a broken man sitting in jail.

If I were playing him as he is today, then yes, I would probably do multiple visits and sit with him. But I was playing him at a time in his life when he was very charismatic. He was flamboyant. He was a movie star and a sports figure who was revered around the world. There’s a confidence and an arrogance that I don’t believe he has today.

Can you talk about your internal and external transformation?

It’s funny because Ryan, when we met that day, said, “You’re a celebrity. I’m paraphrasing, obviously, but you have a lot of films that people know you from. They have a very distinct opinion of your behavior. And OJ Simpson, specifically in his time, was this international star. How are you going to bring these two personalities together?”

I said, “In terms of the physical, my looks are what they are…. But you’re telling an emotional journey, and you need me to give you what you demand from each take. You might need me to be a certain way emotionally, from a whole range of feelings. And it’s my job to give you that.

“And if you hire me, that’s exactly what I’m going to do without question. I’m not going to bring you my opinion of his guilt or innocence. I’m going to be that palette [with] which you paint!”

So, there would be some days where Ryan would come up and whisper in my ear, “OK, do this out of the frustration of having his son commit these murders, and he’s trying to hide it. Then, he’d come back and say, all right, do this as the guilt of what you’ve done.”

Certain things like this would motivate me to give him certain expressions and emotional responses at any given time over that six-month period. I truly believe that, as an actor, it’s our job to give the director the tools he needs to tell his story.

Why did you avoid thinking if OJ was guilty or not as you portrayed him?

It’s a fine line that you have to walk as an actor. You can never judge your character in a positive or negative way.

I’ve been lucky enough to play this guy twice. The first time was in Cameron Crowe’s “Jerry McGuire.” In that flamboyant, confident, athlete, his life wound up in the positive. But in this one, it was a different tragic ending.

A lot of times, the end result with these athletes is that they don’t have the social skills and graces to deal with their everyday lives. And in the case of OJ, two things happened.

He talked about himself in the third person. He’d say, “OJ Simpson doesn’t have to do this and that.” Even that line in the trailer, “I’m not black—I’m OJ,” I believe that these athletes don’t recognize themselves as normal people.

They move on to the next guy. But OJ and people like him still have this confidence. That’s where a lot of that violence came from in his marriage. Those 911 calls, when he heard it played back, it was, “Oh, you know, I was just handling my business. Oh, we were just tussling.”

I truly believe that OJ believed that he didn’t do anything that was above and beyond the call of what he was capable or not even capable, but was entitled to do.

What do you think about the talk that the recent Oscar nominations lack diversity?

Obviously, there are changes in terms of how many Academy Award winners who are black now. There was justice in Morgan Freeman finally winning—things like that. But, is there enough change? No, not enough. But I think there’s evidence of progression.

The more we talk about it, that is what promotes change! We have to continue.

One last time—do you think OJ was guilty?

I still won’t say. But I will say this—my opinion changed back and forth as we were shooting.