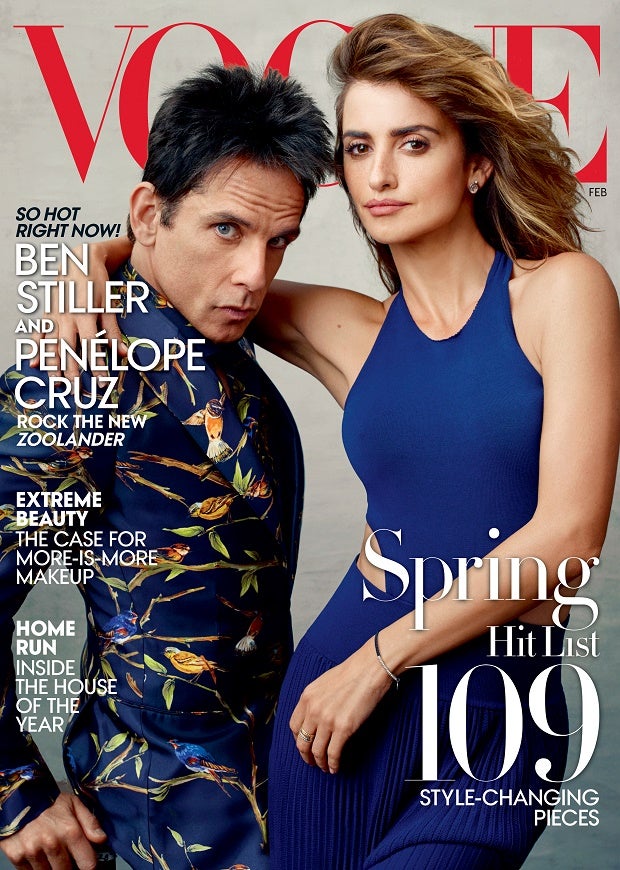 This image released by Vogue shows actor Ben Stiller, portraying Derek Zoolander, left, with actress Penelope Cruz from the film, “Zoolander 2,” on the February 2016 cover of the magazine, available on newsstands nationwide on Jan. 26. AP

NEW YORK (AP) — It was 15 years ago that Ben Stiller’s Derek Zoolander first unleashed his signature Blue Steel fashion face on an unsuspecting public, and a lot has changed.

Mega-model Gigi Hadid was kindergarten age. Netflix didn’t exist, let alone selfies. So why bother taking on “Zoolander 2,” the upcoming quirky sequel to his long-ago quirky “Zoolander?” Because, why not, especially now that the actual fashion world is laughing out loud.

With a few more wrinkles, Stiller’s not-so-bright supermodel hit the February cover of Vogue with actual beauty and co-star Penelope Cruz. The cover and an inside photo spread were shot by actual photographer phenom Annie Leibovitz.

Stiller tells the magazine of his first go-round with Owen Wilson at his side: “We were on our own — both in the fashion world and with the studio, too. They were just like, ‘We don’t quite know what this is.'”

That was before Zoolander and Wilson’s Hansel crashed the Valentino show at Paris Fashion Week last year, bringing the usual jaded crowd to its feet as they strutted down the runway.

The first comedy wasn’t a runaway success, released less than three weeks after the September 11 attacks, though it eventually turned a profit. Thanks to DVDs and cable, it developed a loyal following.

So what can we expect this time? There’s Cruz, for one, as Valentina Valencia, a motorcycle happy Interpol agent in the fashion division.

“I’m one of those people who’s seen the first ‘Zoolander’ four or five times,” she tells Vogue in the issue that hits newsstands Jan. 26. “I’ve done comedy in Spain, in my own language, but I’ve always said I want to do more comedies in English. I do all these intense dramas, and all my characters are always suffering. For many reasons I need to once in a while do a crazy comedy.”

Stiller’s crossing fingers, joking: “There’s that saying — ‘They want a sequel until they get one.'”