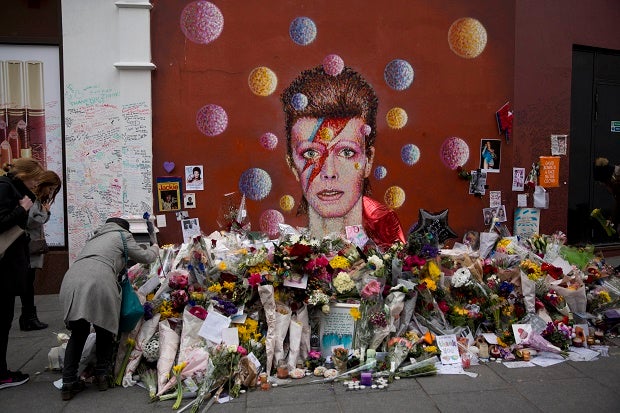 People continue to place flowers around a mural of British singer David Bowie by artist Jimmy C in Brixton, south London, Thursday, Jan. 14, 2016. Bowie, the other-worldly musician who broke pop and rock boundaries with his creative musicianship, nonconformity, striking visuals and a genre-spanning persona he christened Ziggy Stardust, died of cancer Sunday aged 69. He was born in Brixton. AP Photo

NEW YORK, United States—From an outrageously costumed parade to a bacchanalian party in heaps of glitter, memorial events to David Bowie are multiplying as fans find their own ways to mourn the rock legend.

Bowie—a pioneer of glam rock at the start of a half-century career marked by constant reinvention—apparently did not want a soppy public funeral.

He had stayed discreet about his 18-month battle with cancer that killed him Sunday at age 69, and his family said it would hold a private ceremony.

But Bowie’s death has triggered an avalanche of mourning around the world with many fans looking to grieve together.

Arcade Fire, the Canadian indie rockers championed by Bowie when they started out, announced that the group would lead a parade Saturday through New Orleans.

Arcade Fire will be joined by the celebrated Preservation Hall Jazz Band, keeping up the New Orleans tradition of musical funeral parades.

The groups in a Facebook posting encouraged fans to join them and to “dress in your best Bowie outfit or something more strange”—likely an uphill task considering the rocker’s range of characters from the androgynous exterrestrial rocker Ziggy Stardust to Jareth the Goblin King.

READ: Bowie lauded as an artist who made it OK to be different

To many fans, Bowie’s importance lay in his openness to new personas and identities, with his music offering a welcoming new world for those who had none.

One of the most prominent celebrations has been the “BowieBall,” first launched in 2006 in the rocker’s adopted home of New York.

Taking to heart Bowie’s lyric to “put on your red shoes and dance the blues,” revelers each year have picked their most outrageous outfits, often donning drag, and hit the floor to ample amounts of glitter and confetti.

In the wake of the Starman’s death, BowieBall founder Deryck Todd said he is talking with leading concert promoter Live Nation to expand significantly the event, which features DJs and musicians who perform covers.

Todd, a designer, said that the 10th anniversary BowieBall will take place in the coming months and expected it again to draw passionate Bowie fans who were never among “the cool kids.”

“I really hope that this event does provide a home for all the misfits, who can feel like they belong in some way,” he said.

BowieBalls have sprouted up elsewhere, with an edition in Chicago on January 7 that celebrated Bowie’s birthday and new album, “Blackstar,” with almost no one knowing he was about to die.

Todd, through his dealings with the singer’s entourage, said that Bowie himself was aware of the BowieBall and appreciated it.

Past BowieBalls have been captivated by tales that Bowie himself showed up secretly in costume, although Todd acknowledged there was little evidence.

“I will let that magic be what it is for that moment,” he said.

Fans earlier celebrated Bowie in Brixton, the area of London where he was born, with a street party hours after news of his death.

In one of the most organized events, hundreds of fans—some with faces painted like Bowie’s character Aladdin Sane—mourned him Friday at his studio in Berlin where he recorded three of his landmark albums.

A previously arranged Bowie tribute show at New York’s Carnegie Hall whose stars include Cyndi Lauper added a second date, which sold out within minutes Friday.

The second show, at Radio City Music Hall on April 1, will feature additional performers including Michael Stipe, who is making one of his first appearances since R.E.M. disbanded.

Bowie’s family has welcomed the tributes, but stressed that it was not involved.

“Just as each and every one of us found something unique in David’s music, we welcome everyone’s celebration of his life as they see fit,” a statement read.

Read Next
‘Idol’ stars sound unconvinced this will be last season
EDITORS' PICK
Honolulu Café is the cure for your Egg Tarts and Roastings cravings
House energy committee chair Arroyo bats for cheap electricity
PH detects local transmission of Omicron subvariant BA.2.12.1
Congress canvassing of votes for president, VP to begin May 24
Petition to reverse Comelec decision on Bongbong Marcos’ DQ case reaches SC
Luxe property: A way to build, preserve wealth
MOST READ
Heart Evangelista gets a ‘no’ from Chiz Escudero after asking, ‘Do I deserve a bag?’
CebuPac places pilot under disciplinary review after ‘baseless’ post vs Robredo
Closure order vs Megaworld Corp halted as firm vows cooperation with BIR – exec
Man posing as Marcos spox revealed to be an inmate in Bilibid — Guevarra
Don't miss out on the latest news and information.