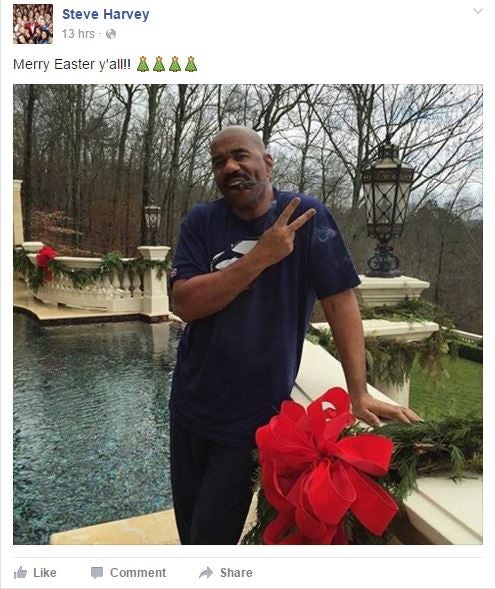 Steve Harvey, the host who botched the announcement of the winner of Miss Universe 2015 pageant, is winning back the Internet.

In his Christmas greeting to fans on Facebook, Harvey poked fun at himself for his gaffe during the prestigious pageant and greeted fans with “Happy Easter” along with four Christmas tree emojis.

It also generated more than 81,000 comments.

Minutes later, he then went back onstage to apologize and say that Miss Philippines Pia Wurtzbach is the winner of the pageant.

Due to his mistake, he became the subject of jokes and memes on the Internet.

The “Family Feud” host has apologized many times for his mistake but not without committing another blunder when he posted “Philippians” and “Columbia” instead of “Philippines” and “Colombia” in his apology tweet. AJH/CDG

Read Next
MMFF: Ticket swapping issue ‘baseless’
EDITORS' PICK
Metro Manila’s daily COVID-19 growth rate drops to 2% — Octa Research
Over 3 Million worth of prizes to be won at Smart Padala’s SENDali Manalo Promo!
SMDC’s Bloom Residences: A master planned community that cares for your health and wellness
What to expect as Metro Manila starts ‘no vaccination, no ride’ policy on Monday
COVID-19 cases in PH pass 3.2 million mark with 37,154 new cases — DOH
Upsilon, Unilever give ‘real talk’ on climate change crisis
MOST READ
IATF protocols now apply to travelers who arrived on or before Jan. 13
‘Not my loss’: Did Kris Aquino just comment on her breakup with Mel Sarmiento?
Thailand records first Omicron death
Tito, Vic and Joey still not quitting, breaking trends as they celebrate 50th year in the biz
Don't miss out on the latest news and information.