Actor James Woods happy to be alive after Colorado crash 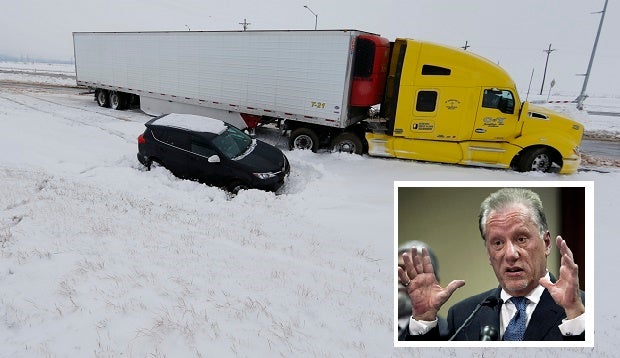 A tractor-trailer and sports utility vehicle sit stranded in a snowbank along Interstate 70 as a winter storm packing high winds and snow blankets the plains Tuesday, Nov. 17, 2015, in Aurora, Colo. The storm has closed much of Interstate 70, Colorado’s main east-west highway, because of blizzard conditions on the Eastern Plains as well as in northwest Kansas. Inset: In this Wednesday, Feb. 29, 2012, file photograph, actor James Woods takes questions from reporters during a news conference in Providence, R.I. Woods, who was involved in an accident on Monday, Dec. 14, 2015, on Interstate 70 in a canyon east of Glenwood Springs, Colo., says that he is happy to be alive after the incident in which a guardrail kept his Jeep Grand Cherokee from dropping 100 feet to the Colorado River below. AP Photo and File Photo

The accident happened Monday on Interstate 70, where it cuts through the scenic Glenwood Canyon in western Colorado. The stretch of road has steep cliffs on either side.

In a series of tweets, Woods said another person driving over 75 mph spun out and that he hit a wall along the highway to avoid that driver.

Woods said that after hitting the wall on the other side of the road, he slid backward going 60 mph. He said a guardrail kept his Jeep Grand Cherokee from dropping 100 feet to the Colorado River below.

Woods praised the police, firefighters, tow truck drivers and everyone else who helped him. He also apologized for rambling and said he had a “little concussion.”

On Tuesday, Woods said he was back on the road again.

US: 5 killed in crash of small plane in Colorado mountains

‘Revenge of the Nerds’ star pays fine for car crash