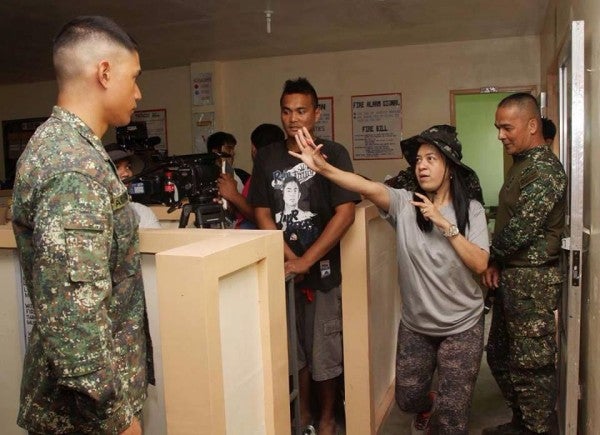 When she penned the script of her latest film “Mandirigma” (Warrior),  journalist-turned-director Arlyn de la Cruz never realized that it would be an omen for another imminent and real-life incident involving the commandos of the Philippine National Police’s Special Action Forces.

The film, an entry to this year’s MMFF New Wave section, shows the lives of Philippine Marines as they wage war against the renegade forces in the Mindanao region.

“It represents what happens with the Philippine Marines as they go to the frontlines. Sometimes they are victorious, sometimes they are defeated. Whatever the result of the mission, whether there’s a casualty or not, they still go on with their jobs” she said.

“He is the most wanted terrorist at that time. I would like to highlight that the problem of terrorism has gone region wide that’s why there should be a character Hamda Marawan (portrayed by Mon Confiado),” she said.

De la Cruz wrote the draft of the script in October  last year and finished the final revision in December, or about month before the Mamasapano incident took place.

She said she has no knowledge that during that time, the authorities were already on the lookout for Marwan. It’s clear that she didn’t intend the film to be an allusion to the Mamasapano clash.

“[The film] is a representation of some stories people might have heard in the previous wherein there were ambushes, beheadings and hostage takings the government soldiers have to face,” she said.

“Kahit ilan malagas sa kanila, kahit gaano kasakit yun sa kanila (no matter how many fell [to their deaths], no matter how deep they were hurt [by their comrades’ demise], the following day is just another day sacrificing their lives.” 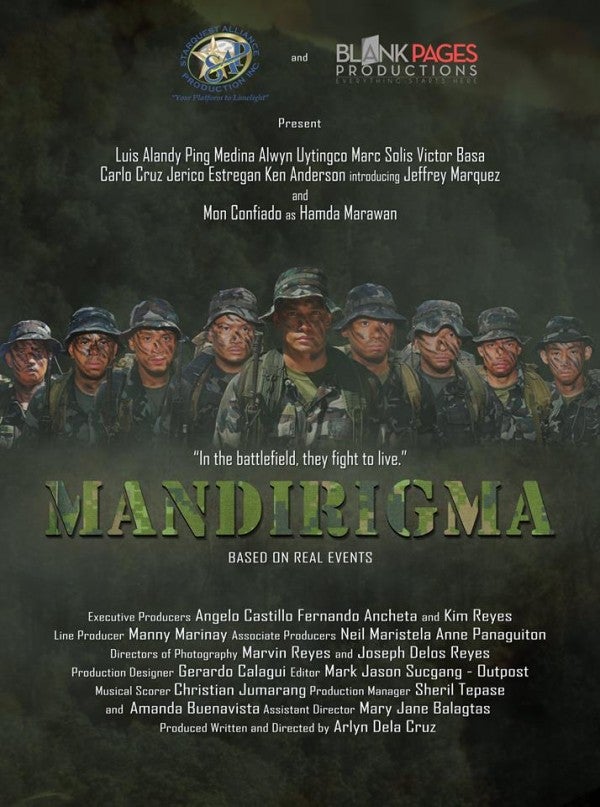 She said “Mandirigma” is her way of giving tribute to men and women of the Philippine Marines and Armed Forces of the Philippines in general, who have been a big part of her journalistic experience for 25 years.

Believing that credibility is a necessary element of filmmaking, de la Cruz said that before doing any film project, she ascertains that she has a good grasp of the story, especially one that she covered as a journalist.

“I won’t make a film if I haven’t completely understood the story or I haven’t witnessed it from a personal experience. I want to do movies that highlight truths in the society…those which I can prove happened in real life,” she said.

This view was also what prompted her to bring to life her directorial debut “Maratabat”, which was reminiscent of the Maguindanao massacre, the worst election-related violence in Philippine history.

And with “Mandirigma”, she absolutely has a clear message to tell. “The soldiers and the rebels…Lahat sila may pinaglalaban…lahat sila may pinanggagalingan..(all of them have a cause to fight for…all of them came from somewhere…) there is no right or wrong sa perspective nila.”

“This would lead to understanding war without condemning both parties. At makakahanap ang mga stake holders naten ng tamang approach on how to go about the problem kasi kung hindi maulit-ulit lamang ang lahat ng ito at hindi matatapos (And all the stakeholders will find the right approach on to how to go about the problem because if not, this will go on and on and will never end).”

The MMFF New Wave 2015 will run from December 17 to 24 at SM Megamall, Glorietta 4 and Robinsons Place Manila. On its fifth year, the MMFF New Wave section showcases the works of indie filmmakers.  TVJ