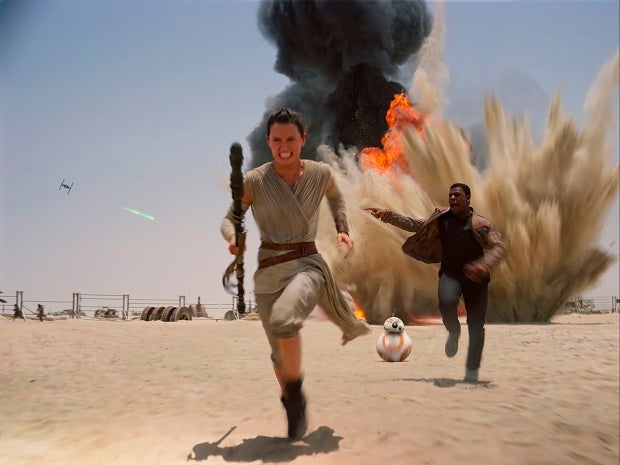 This photo provided by Disney shows Daisey Ridley as Rey, left, and John Boyega as Finn, in a scene from the new film, “Star Wars: Episode VII – The Force Awakens,” directed by J.J. Abrams. The movie, which received a PG-13 rating, releases in the U.S. on Dec. 18, 2015. Film Frame/Disney/Copyright Lucasfilm 2015 via AP

LOS ANGELES, United States—Michael Bender was hooked by age two. Jennifer Landa got the bug when she was nearly six. Steve Sansweet was well into his 30s when the Star Wars passion was born.

READ: ‘Star Wars: The Force Awakens’ gets a PG-13 rating

All three are among the legions of hardcore fans the space epic has generated over the years and who are champing at the bit in anticipation of the saga’s latest installment—”Star Wars: The Force Awakens”—that hits screens in December.

From the United States, to Russia, China and Saudi Arabia, the franchise has spawned a remarkable global fan base arguably unheard of in movie history and spanning several generations.

“The fans have really played an incredibly major role in keeping Star Wars alive and growing,” said Sansweet, an avid fan and former Wall Street Journal reporter who joined Lucasfilm in 1996 as head of fan relations and content management.

He said the genius of Lucasfilm after the first movie came out in 1977 was to listen closely to its fans and to allow them to claim ownership of the franchise to some extent.

“Movies before were seen as here and gone, there was no real attempt to bring in the fans,” Sansweet said.

“Lucasfilm let go to a large extent when other companies were going out at conventions and handing out cease and desist orders.

“But Lucas was much smarter about it… and allowed (Star Wars) to spread into popular culture.”

Michael Bender, a physical therapist, is one of those die-hard fans who became smitten with the saga as an infant.

“I was two when I went to see ‘The Empire Strikes Back’, the second film in the series, and this is my first ever memory actually,” said Bender, 36, who lives in the Los Angeles area.

There is no mistaking his passion for the series upon entering the two-bedroom apartment he shares with his wife and two small dogs.

On one table sits a limited-edition $3,200 book set that documents each chapter of the saga.

Another side-table has a Star Wars collectible chess set, and on display nearby are four automated Star Wars books complete with light and sound.

Other Star Wars items—figurines, prints, paintings—are scattered around the living room and many more are stored at his parents’ house.

In a large rollaway chest, Bender also keeps the cherished stormtrooper costumes that he wears as a member of the “501st Legion,” an international fan-based Star Wars costuming group.

Created in 1997, the group has grown into a worldwide phenomenon with 8,000 members who take part in charity events and other affairs related to the film.

Bender says his membership in the “501st Legion” has allowed him to fully live out his passion for the saga and meet fellow fans, including in Tunisia where several of the Star Wars movies were partially shot.

“It has created a lot of bonds,” he said. “When I went to Tunisia in 2011, I met some fans and… we all bonded instantly.

“We were finishing each other’s sentences before the end of the evening.”

For Jennifer Landa, 35, an aspiring actress in Los Angeles, the passion for Star Wars borders on obsession.

Her apartment is filled with Star Wars memorabilia —sheets, luggage, jewelery, cookie cutters, slippers, mugs, dresses, purses, a glass-encased coffee table with Star Wars figures and the list goes on and on.

She even had a Star Wars-themed wedding last year at which her father dressed as Darth Vader, stormtroopers acted as ushers and the two flower girls dressed as Princess Leia. The wedding cake was topped with two Star Wars creatures—Wampa (a snow beast) and Tauntaun (a snow lizard).

“I wanted something that would represent who we are as a couple,” Landa said of her wedding. “But we also didn’t want to alienate guests who weren’t necessarily fans.”

Sporting Darth Vader tights and a Star Wars top, she said she realizes her passion may be considered over the top by some but is comforted by the fact that she is by no means unique.

“I thought for a while that I was alone in feeling like that but then I went online and found people who felt the same way,” Landa said.

“So now, I’m just like why not go full force. This is who I am and I’m not gonna hide anymore.”

Like Bender, she has bought advance tickets to see the movie several times and hopes her five-month old daughter Lucia will eventually share the same passion.

“Pretty much everyday is related to something Star Wars,” Landa said. “Whether I’m using a stormtrooper spatula to make my breakfast, to listening to the music or to tweeting and sharing the latest trailer for ‘The Force Awakens’, to making jewelery.

“I mean my day is pretty much all Star Wars,” she added. “It’s part of my daily life.”