The plot thickens further on ‘AlDub’ 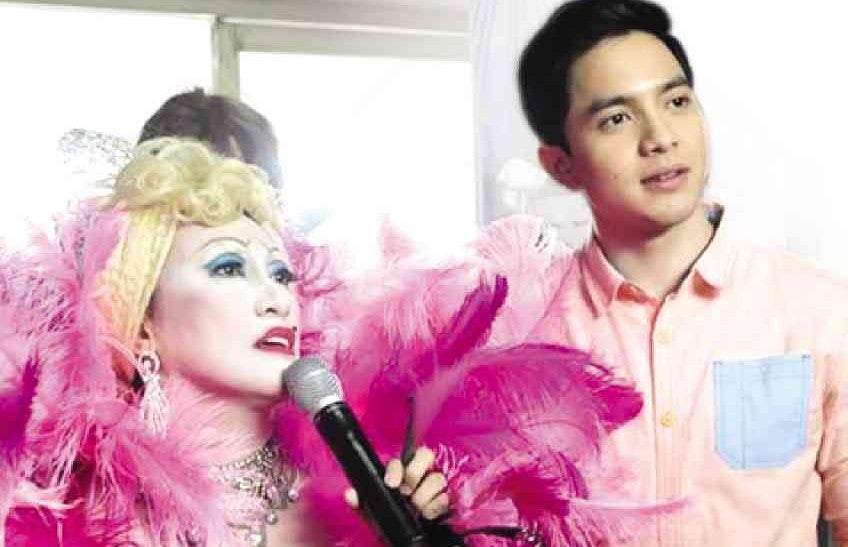 JUST AS “Eat Bulaga’s” “AlDub” phenomenon was getting to feel like a trite, tired and excessively stretched-out tale, last Nov. 11’s telecast introduced a new plot wrinkle and character to freshen and perk up its narrative:

Yaya Dub’s Lola Nidora was caught off-guard by the unexpected arrival of Alden Richard’s own Lola Babah Something-Or-Other, an even more fabulously wealthy and wacky weirdo who jetted in from Europe to support her beloved grandson in his time of need.

You see, his romance with Yaya was for the nth time in limbo due to his having lost an all-important ring that Lola Nidora had entrusted to him for safekeeping.

The old virago was once again screaming invectives at him when his grandmother made her gorgeously grand entrance in a floridly fussy and show-stopping costume, complete with a beauty queen’s crown, feathers, tassles, baubles, bangles, beads and all other bling-bling borloloy—the works!

The amazing apparition wowed everyone and rendered Lola Nidora stupefiedly silent for once, as Lola Babah archly and feistily defended her poor grandson.

Was Nidora angry at him for losing a family heirloom? No problem, Babah would replace it with a hundred other gems—after all, she owned jewelry shops in Hong Kong and Paris!

Now, we don’t know how long Alden’s lola is slated to stay on the show, but we hope that it won’t be for just a couple of telecasts.

If the production plays this new plot wrinkle right and builds it up as an ongoing “Battle of the Loopy Lolas,” it could heat up the sometimes already tepid show and make it interesting and diverting again!

What made the introduction of Lola Babah really a fun treat was the characterization provided by the actress assigned to play the plum part. She was fully made up, but we evinced the “signature” facial features of Ai-Ai de las Alas under all that glop and goo!

Kudos to Ai-Ai for the “totality” of her enthusiastically idiosyncratic characterization which made her look like a really ancient and “preserved” incarnation of Carmen Rosales personifying a turn-of-the-century Manila Carnival Queen!

In addition, Ai-Ai used a thin and heavily accented speaking voice that made her sound like the filthy-rich jet-setter her character was supposed to be.

Alas, Wally Bayola as Lola Nidora was thoroughly upstaged by this new nemesis, and all he could do to keep up with her was to scream and scream as usual—but now, to little effect.

If Lola Babah is here to stay for a spell, Nidora has to shake up and improve her act because the game has changed and new rules and standards have just been put into play!

The same reality check goes for the other characters in the show, Alden Richards and Maine “Yaya Dub” Mendoza included. After all, they’ve been doing pretty much the same thing for more than three months now, while Lola Babah is a new and fresh arrival, so she has yet to look and feel tired and trite.

That’s what’s good about new inputs, they force the relative old-timers to shake up their own acts or else they could end up coming across like yesterday’s news—and last week’s old laundry!