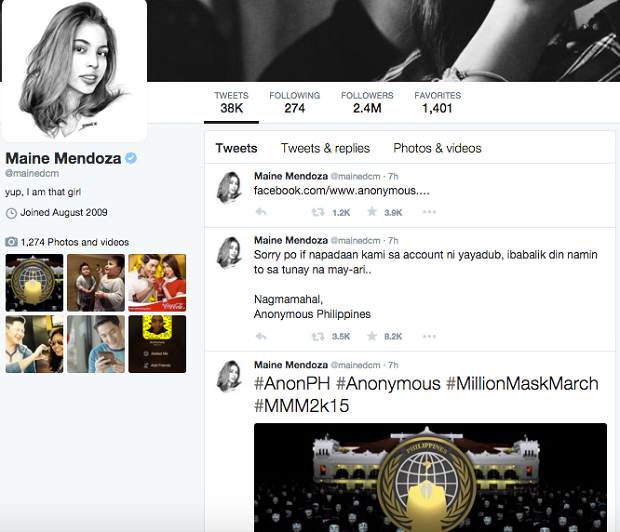 The Twitter account of Maine Mendoza, better known as “Yaya Dub” and the other half of the hit “AlDub” love team, was hacked by a group claiming to be Anonymous Philippines.

(We are sorry if we dropped by the account of yayadub. We will return this account to its rightful owner. Love, Anonymous Philippines.)

Four tweets from the group have been posted on Mendoza’s account, inviting people to its “Million Mask March.” The tweets are still posted on her account as of 8:30 a.m. on the same day.

The meteoric rise of Mendoza due to the surging popularity of the AlDub love team made her Twitter account the third fastest-growing celebrity profile for September, according to Twitter monitoring site socialbakers.com.

Anonymous Philippines has been hacking government websites to push its various demands. Recently, it defaced the website of the National Telecommunications Commission to support the Filipinos’ fight for faster and better Internet service. AJH/RAM

Maine Mendoza a ‘superstar recruited by mainstream TV’—Boy Abunda
How ‘Kalyeserye,’ AlDub made Halloween all about laughter

SWS: Only 2 of 5 Filipinos believe they can speak freely vs Duterte