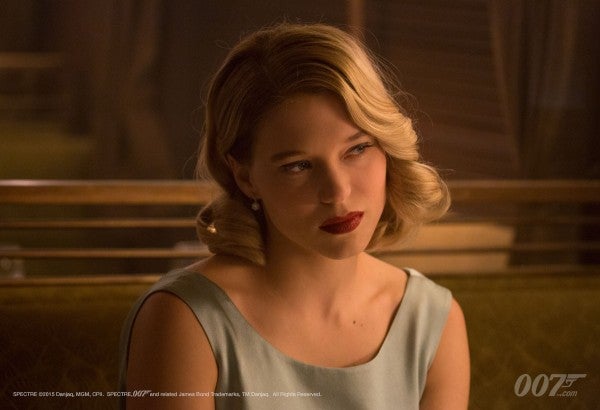 In the film, a cryptic message from the past sends James Bond (Daniel Craig) on a rogue mission to Mexico City and eventually Rome, where he meets Lucia Sciarra (Monica Bellucci), the beautiful and forbidden widow of an infamous criminal. Bond infiltrates a secret meeting and uncovers the existence of the sinister organisation known as SPECTRE.

Italian Monica Bellucci is an actress that producers Michael G. Wilson and Barbara Broccoli had tried to recruit in the past, denied only for scheduling conflicts. “We’re delighted to finally get her,” says Wilson. “She is terrific in the role.”

Bellucci, meanwhile, says that she was delighted to finally join the series. “I said yes right away because I was very happy to work with Sam Mendes and to be part of this project,” she explains. “I have so much respect for the James Bond films in general because I think they are such a big part of cinema history. And I respect so much all the James Bond girls; I think they are beautiful actresses and talented and it was very interesting for me to be part of this history.”

The character she plays is a seductive Italian woman who holds a number of secrets. “Her Mafioso husband is killed and she risks the same thing happening to her,” Bellucci explains. “When she first meets Bond she doesn’t trust him because she comes from a world where only corrupt men have the power.

“But the chemistry and the attraction between them is so strong and she realises her feminine power over him. Then she trusts him. He saves her and she gives him the information he needs.” She laughs. “And they find an interesting way to sign a contract with each other!”

Another woman playing a pivotal role in SPECTRE is Madeleine Swann, who is brought to the screen by French actress Léa Seydoux. “She’s a doctor and she’s a strong woman,” Seydoux says of her character. “She is intelligent, independent and she doesn’t want anything to do with Bond when she meets him for the first time. She’s not impressed.”

As the story progresses, however, events force a change in their dynamic, and their relationship softens. “She understands Bond very well because she has an insight into the world that he lives in,” the actress continues. “For his mission he needs to understand things from his past and he needs Madeleine for the information she can provide. Eventually, it is a very strong relationship between them.”

SPECTRE is opening across the Philippines on Friday, Nov. 6.