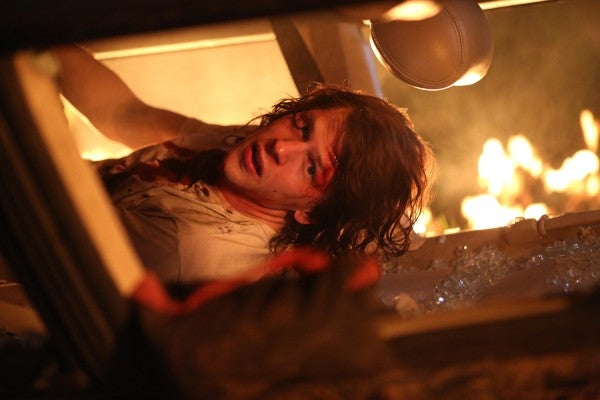 L.A. Weekly describes it as “A bloody valentine attached to a bomb. It’s violent, brash, inventive and horrific, and perhaps the most romantic film of the year.”

Boston Globe calls its stars Jesse Eisenberg and Kristen Stewart, “Tender, forgiving, and sexy, they’re the hottest couple on screen at the moment.”

They’re talking about Buena Vista International’s new dark comedy “American Ultra,” the trippy story of Mike (Eisenberg), a convenience store clerk and his girlfriend, Phoebe (Stewart) whose sleepy, small-town existence is disrupted when his past comes back to haunt him in the form of a government operation set to wipe him out.

“The script is funny and scary and violent and sweet,” producer Anthony Bregman says. “It makes you swing in so many directions emotionally, which makes for a great movie experience. [Screenwriter] Max Landis knows the action genre well, which allows him to make fun of it while living up to the conventions and expectations.”

A large part of the humor comes from the fact that the filmmakers never lose sight of the idea that reclaiming his hardcore combat skills doesn’t change who Mike is. “Mike is a bit of a dreamer and he never loses that quality,” says producer David Alpert. “It’s just that now people are trying to kill him. We always tried to maintain a connection to what it would really be like if the stoner guy in your town got these abilities.”

Director Nima Nourizadeh, whose first film “Project X” has established him as an innovative new talent in Hollywood, impressed the producers with his ideas for maximizing both the action and the humor in the script. “Nima is a startling visionary in terms of how he sees a scene,” says Landis. “He didn’t change the script much, but the things he added made it even better. He structured the rhythms and beats in a way that is genuinely funny and fun to watch.”

Nourizadeh brought a sharp sense of humor, as well as an authentic sense of danger and visual excitement to the script, according to Bregman. “He is better than anyone I can think of at establishing a really calm, stable atmosphere on screen that eventually explodes into a state of complete choreographed chaos. It’s really fun to watch that build and ignite.”

The writer and director first met in April 2013 to exchange ideas about future projects. Landis told Nourizadeh about “American Ultra,” a spec script no one outside of his team had read yet. “The script really exceeded my expectations,” says the director. “Max is an intriguing storyteller. He feeds you information a little bit at a time until you are suddenly somewhere unexpected and completely crazy. His writing is always entertaining, but what separates this from other action comedies I’d read was that he nailed down the relationships between the main characters. It was the perfect second project for me.”

Producers Bregman and Alpert agreed. “The combination of Max and Nima was irresistible,” Bregman says. “Max’s first feature script, `Chronicle,’ is a favorite of mine. It was made on a modest budget with really interesting visuals that made it seem much bigger than it was. Nima’s `Project X’ was, in my opinion, one of the best movies of the last few years. It’s another small film with a really big reach. Both were fun and entertaining and innovative, and at the same time dealt with big issues in a subtle way. It’s exactly the sort of movie I want to see.”

“Teaming Max and Nima up and then adding Jesse Eisenberg and Kristen Stewart to the mix feels like we’re looking at the next generation of great Hollywood filmmakers,” concludes Alpert.