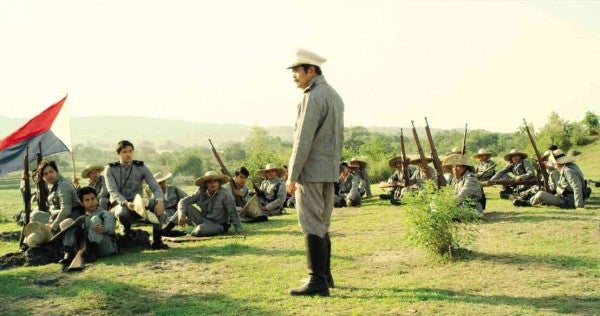 On Saturday, the historical epic “Heneral Luna,” on its fifth week in local theaters, was a mere P2 million away from hitting the P240-million ticket sales mark.

Insiders were a bit worried because the film was showing in only 50 cinemas in Metro Manila and business was quite slow in the provinces. Still, producers remained optimistic that it would breach the P240-million mark over the weekend.

A big budget epic like “Heneral Luna,” which cost P80 million to make, needs to rake in at least P240 million to break even.

“Producers and cinema bookers need to be more open to variety and risk-taking. They also have to take into account that some films need time to find their audience. Less skepticism and more sincere support towards indie films would help,” said ‘Luna’ director Jerrold Tarog.

Tarog said that “strategic out-of-the-box marketing and passionate word-of-mouth” spelled the difference for this historical film—a genre that is not exactly considered a crowd-pleaser in these parts.

READ: Jerrold Tarog–how he went from agriculture to music to ‘Shake, Rattle & Roll’ to ‘Heneral Luna’

“The great feedback spread in social media. If a film trends online, it creates a bandwagon effect,” he said.

In the first week, “Heneral Luna” had a hundred theaters. By the second week, the number of cinemas was cut by half.

As the rave reviews snowballed, theater owners took notice. The film regained the cinemas it had lost.

“Its success is beyond my wildest imagination. I’m still in a daze with its popularity even after five weeks in the cinemas. I’ve got enough bruises on my body just pinching myself constantly,” said producer Fernando Ortigas.

“It was just the right set of circumstances,” said Tarog. “We applied everything we believed in regarding the film, its presentation and marketing. Thankfully, the majority of the Filipino audience embraced the package and made it their own, allowing it to become what it is now.”

Actor John Arcilla, who was cast in the title role, beating more bankable and younger superstars, said it was the audience that did “the tumbling and juggling” to promote the film.

“These days, we don’t need to rely on shallow and sensational show biz issues to make noise and create buzz for a film,” he said.

It was a strange “phenomenon,” he said. “This film has revolutionized even the way films will be promoted versus the traditional, mainstream way.”

As Ortigas put it, “The people took ownership of the film.”

Arcilla agreed. “A lot of people, whether celebrities or ordinary students, advertised the film on their Facebook pages and Twitter accounts. They took photos of the TV monitors that showed sold-out ‘Luna’ screenings and posted the pics online. Some created memes, Dubsmash videos and fan art. Even priests discussed the film in their weekly sermon.”

“I find the memes fascinating and endlessly entertaining,” said Tarog.

Rocha offered a theory: “The film succeeded because of its strong message and great storytelling. Our director Jerrold has his pulse on what’s hip among Millennials.”

“People want change and Luna made them braver to instigate change,” said Rocha.

Arcilla believes Luna’s story was “cathartic” as far as many Filipinos are concerned. “It echoed our sentiments … We’ve been so restless for so long. We’ve been asking a lot of questions.”

“We have a feeble sense of nationhood and our potential as a nation is often cut down by lack of foresight and critical thinking and selfish interests,” he said.

Tarog said the success of “Luna” at the till would hopefully pave the way for the two other films in the planned trilogy that includes biopics of other historical figures Gregorio del Pilar and Manuel L. Quezon.

“The likelihood of the trilogy being completed will depend on the turnout of ‘Heneral Luna,’” the filmmaker said.