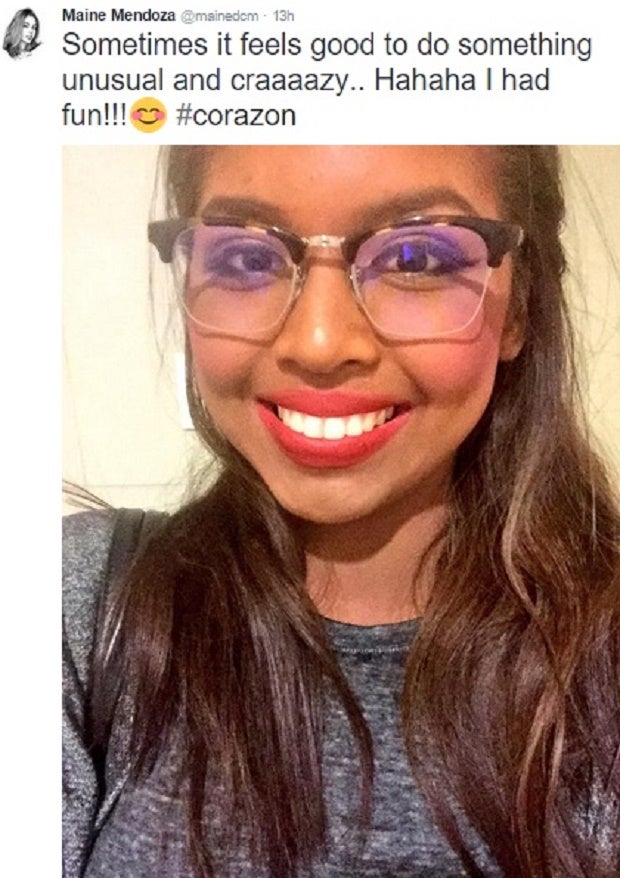 Mendoza was first invited through a Twitter video by Bryce Soderberg, one of the Lifehouse members.

In response to the invitation, Mendoza said she hoped to attend the concert.

However, on Thursday night, Mendoza posted her photo on her Twitter account with heavy make-up and wearing glasses.

She said, “it feels good to do something unusual and crazy.”

“Heard you came. Sorry we missed you,” his post read.

Mendoza confirmed that she indeed attended the concert, saying “I did! You guys did great and I had a really good time! Thank you!!! Hope to meet you next time.”

Yaya Dub is the other half of the famous loveteam “AlDub,” a pair between Mendoza and actor Alden Richards in GMA-7’s noontime show Eat Bulaga’s “Kalyeserye.” NC/RAM

Read Next
‘Twilight’ author says new book is ‘not a real book’
EDITORS' PICK
Notice of 2020 regular meeting of stockholders June 18, 2020
SM prepares for ‘safe malling’
Leveling up your ‘lutong bahay’ with the kitchen companion you never knew you needed
NBI, Immigration to join hunt for ‘underground’ medical clinics
2 Chinese nationals arrested in raid on another unlicensed COVID-19 hospital in Pampanga
P2.2 trillion in losses: Cost of COVID-19 impact on PH economy
MOST READ
Revillame tells Roque: ABS-CBN is in my heart despite being in rival network
NCR is ready for GCQ — Palace
LOOK: Robredo, Vico Sotto, check Community Mart ops in Pasig
Año: Quarantine passes not needed in GCQ, movement restricted to essential travel
Don't miss out on the latest news and information.