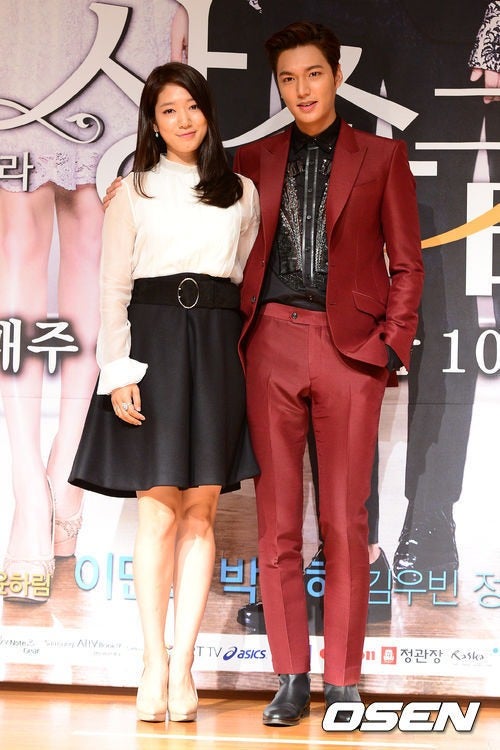 Rumors that Korean actors Park Shin-hye and Lee Jong-suk are dating, reported Wednesday, have prompted members of the public to highlight her previous “romances” with other stars Lee Min-ho and Jung Yong-hwa.

Park achieved her breakthrough success in the 2013 drama series “The Heirs,” as the on-screen love interest of Lee Min-ho. A year later, she acted in her second hit drama series “Pinocchio,” opposite Lee Jong-suk.

Fans swooned over the love scenes in “The Heirs” between Lee and Park. Chinese media reported in January 2014 that the two had been dating for the past two months, which Lee’s agency lambasted as “ridiculous and 300% false.”

Park’s agency also credited the “groundless rumors” to the popularity of “The Heirs” in China.

Lee Min-ho is currently in a relationship with K-pop singer Suzy, from girl group Miss A. The local news outlet that broke the story, later confirmed by both Lee and Suzy, was the same news outlet that reported Park was dating Lee Jong-suk on Wednesday.

Park and Lee have been photographed outside each other’s homes and on alleged dates, as reported by news outlet Dispatch, but both of the stars’ agencies quickly slammed the reports and insisted the two are “just close friends.”

In the early years of her career, Park also starred opposite K-pop singer Jung Yong-hwa, from boy group CNBLUE, in two drama series.

Jung played a friend who harbors feelings for Park in the romantic TV drama “You’re Beautiful” in 2009. Two years later, he played her on-screen love interest in another romantic drama series, “Heartstrings.”

Though they acted as on-screen lovers on the small screen, Park and Jung have never seriously been at the center of dating rumors.

At the 2011 press conference for “Heartstrings,” Jung said about Park, “I feel so comfortable around Park Shin-hye, she’s like a member of (his group) CNBLUE. She is very laid-back and bright — she’s one of the few celebrity friends I have.”

Park said at the same press conference, “Jung Yong-hwa and I know so much about each other, I think it would be difficult for us to start a romantic relationship.”

The actress reiterated on an entertainment program in March 2013 that she and Jung were “just good friends.” Jung said on a talk show last year that Park often attended CNBLUE concerts due to their friendship.

Park is an international Hallyu icon with a strong fan base spanning several Asian countries.