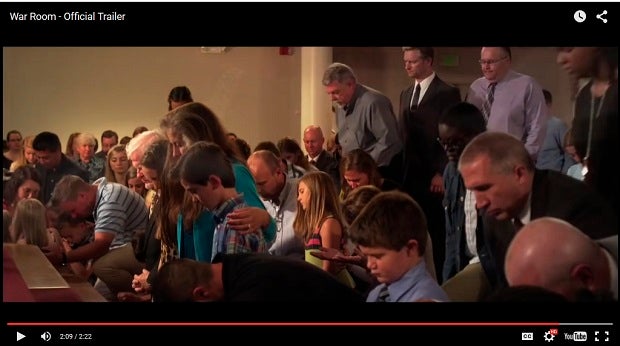 The Christian release about a seemingly perfect couple in a crumbling marriage who find help through prayer made more than $9.4 million on a slow Labor Day weekend.

That was enough to bounce “Straight Outta Compton,” a biopic about the pioneering rap group NWA, from the top spot, which it had held for three straight weeks.

Its $8.6-million haul on Friday, Saturday and Sunday put it in second place, for a cumulative $149.8 million over four weeks.

“A Walk in the Woods,” with Robert Redford and Nick Nolte, came in third during its first weekend in North American theaters with an $8.2 million box office take.

Based on a book by travel writer Bill Bryson, the film dramatizes his homecoming hike along the Appalachian Trail with an old friend, after a long absence from America.

Fourth went to action thriller “Transporter: Refueled,” by French director Camille Delamarre, which made $7.4 million during its debut weekend.

“Mission Impossible: Rogue Nation,” the heart-pounding Tom Cruise vehicle, finished fifth and pulled in $7.2 million during its sixth week in theaters, for a cumulative gross of $182.6 million.

Sixth was “No Escape,” the expat adventure film starring Owen Wilson as a father trying to save his family in the middle of a foreign country’s political uprising. It raked in $5.5 million.

In a surprise finish on the slow box office weekend, ninth place went to Mexico’s “Un Gallo con Muchos Huevos” (A Rooster with Many Eggs), a Spanish-language animated feature, which pulled in just above $3.4 million in ticket revenue.

The result was stunning because the 3D film about a little rooster that fights a mean rancher opened in less than 400 theaters, was shown in its original Spanish with English subtitles and had little advertising in North America.

“Inside Out,” Pixar’s 3D animated comedy-drama set in the mind of a young girl, was tenth at $3.2 million.