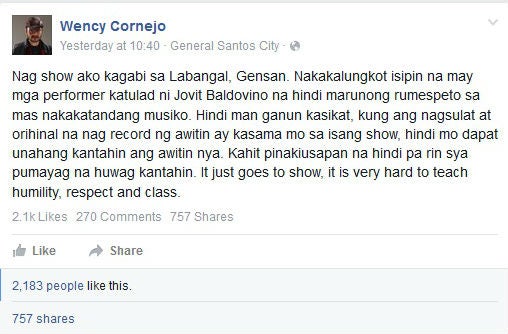 Musician Wency Cornejo took to Facebook to criticize fellow singer and “Pilipinas Got Talent” winner Jovit Baldivino for the latter’s supposed “lack of respect” for older musicians during a show in General Santos City on Monday.

Cornejo said Baldivino insisted on singing the hit “Pusong Bato” despite the presence of its original singer and composer Renee dela Rosa, who was also set to perform in the same event with his band Alon.

(I had a show last night in Labangal, Gensan. It is sad to think that there are performers like Jovit Baldivino who do not know how to respect elder musicians. Although not famous, if the composer and original singer of a song is with you in a show, you should not preempt the singer in singing his song.)

“Kahit pinakiusapan na hindi pa rin siya pumayag na huwag kantahin (Although he was requested not to sing the song, he did not agree). It just goes to show, it is very hard to teach humility, respect, and class,” he added.

However, in an interview with radio station DZMM, Baldivino’s road manager Jerry Telan said their camp was not informed of the lineup of performers, adding that it was councilor Bobby Pacquiao, brother of Sarangani Rep. Manny Pacquiao, who requested Jovit to sing “Pusong Bato.” YG/RAM