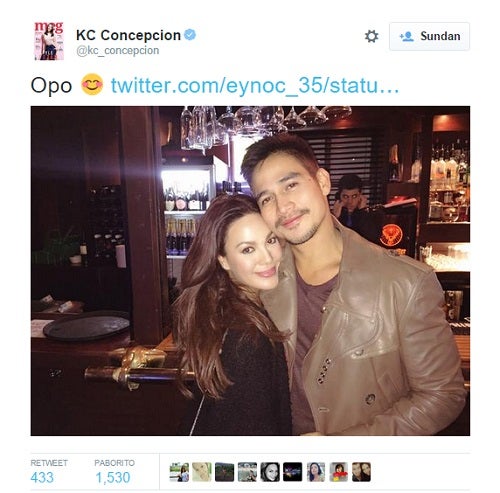 Former celebrity couple KC Concepcion and Piolo Pascual have made peace with each other four years after their breakup.

In response to a question of a Twitter follower on Monday, KC said she got a chance to talk to Piolo in London.

(Did you and Piolo have a chance to speak to each other, even just a simple greeting?)

“Opo (Yes),” KC replied, sharing an all-smiles photo of her side by side with Piolo.

The two stars are currently in London with other ABS-CBN celebrities for the Europe tour of noontime variety show ASAP 20.

KC and Piolo, who played lead roles in the remake of Korean drama “Lovers in Paris,” went public about their relationship in 2010 but broke up a year after.

The former couple did not reveal the reason for their split, but in an emotional interview with talk show The Buzz, KC said she was looking for something that a woman would normally look for in a boyfriend. YG/RAM