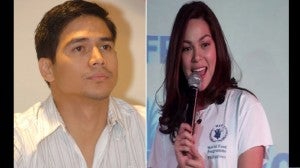 “Dear KC Concepcion: Been there. Done that. Love, Carmina Villaroel.”

Although loaded with the dreaded implication, this anonymous entry in the website www.darlasauler.com was still among the lightest comments that cluttered cyberspace on Monday following KC Concepcion’s very public meltdown on Sunday over her breakup with matinee idol Piolo Pascual.

Actress Carmina Villaroel’s husband, Rustom Padilla, from whom she has separated, is now known as BB Gandanghari and dresses like a woman.

In a pretaped interview on ABS-CBN’s “The Buzz” with host Boy Abunda, KC, who is a talent of the network, threw caution to the wind and, with it, the image of sensibility and stability required of her as a special UN ambassador against world hunger.

Not nearly all caution, however, even if it was billed by the talk show’s teasers as a tell-all. And although weepy, KC was quite winsome, looking very young with little makeup and blushing furiously when stopping herself from revealing more than she thought she should.

Just the same, at press time, the topic was trending worldwide on the social networking sites Twitter and Facebook, where hecklers said what KC wouldn’t, and more. A lot more.

For added punch, many entries were made in the names of show biz personalities, though obviously they were posted by kibitzers—like that one supposedly by Villaroel. Less than 24 hours after the broadcast, rightonthemark.wordpress.com had ranked the “Top Ten Celebrity Reactions.” These include:

Rica Peralejo—Yes… my supposed relationship with Piolo a few years back was just a promotional scheme for “Sa Piling Mo.”

Gabby Concepcion—Piolo, tell me the truth. Did you just use KC to get close… to me?!

Sharon Cuneta—Why should KC, when it comes to love, be “The Biggest Loser”?

Carmina Villaroel—KC, I know how you feel. But at least, you were not married.

Scanning online comments, the word “bloodthirsty” comes to mind. But, for the record, Piolo—one of ABS-CBN’s biggest male stars—has, several times in the past, categorically denied the damning rumor about his sexual preference.

TV host Bianca Gonzalez (@iamsuperbianca): “Can’t be easy for anyone. KC spoke well through such a tough time. I wish both KC Concepcion and Piolo Pascual the best.”

A dedicated KC-Piolo fans club, KrisPiBerks on www.facebook com, called for sobriety: “We… hope that due respect will be given to both PJ and KC after the airing of the pretaped interview of KC… Whatever the outcome is, let us all be accepting and please adhere to privacy, dignity, diplomacy, positivity and peace.”

Sadly, the KrisPiBerks members are the exception rather than the rule, and not all fans are fans of both parties.

“Anonymous,” also on www.darlasauler.com, berated KC, saying she should just have issued a statement. “No need for that TV interview. Personal is personal… that’s why I admire Piolo more for keeping mum on this subject… U cannot bring good people down, KC… what a brat.” This one’s clearly in Piolo’s corner.

This one is not: “It’s not a decease (sic) to be gay.” Neither is @Kiddow23: “The sad ending of a fairytale—they’re both Fairies?”

A few posts were surprisingly thoughtful, like that of MGB on darlasauler.com: “Both KC and PJ went into the relationship thinking there was a chance, so they were both truthful when they went into it… Obviously, [he has an] identity crisis… Where there’s smoke, you can bet 100 percent there’s fire.”

“KC needs a real man,” @johansalarda said, rather pointedly. “She doesn’t have to compete with (bleep, ours).”

To Piolo’s credit, he issued an apology Monday afternoon within hours of arriving from a show in Japan: “I apologize to the public for the breakup… both of us are undergoing a personal crises (sic).”

A visitor at darlasauler.com smelled something fishy: “There is more to it than this… merong agenda.”

Filmmaker and industry observer Jose Javier Reyes pointed out in his own blog, retrospectively: “There may have been personal emotions involved—a whole lot of it—[but] this coupling goes farther than the kilig (thrill) of romance. This love affair involved investments.”

Meanwhile, a highly placed source inside ABS-CBN said the interview as aired had been heavily censored. “KC dropped some very scathing remarks,” the source said. “The network has to protect its talents.”

On a rival TV5 talk show “Paparazzi” that same day, KC’s mother Sharon Cuneta said relationships going bad were part of life and that her daughter was not the type to quickly berate people even if she felt offended.

In a text message to the Philippine Daily Inquirer, Cuneta sounded more relieved than wronged: “It’s over now and that is what matters to me. KC can now move on and I pray that she meets the right man for her after this, although I don’t think that’s her priority now. I’m glad it’s over so my daughter doesn’t have to go through more drama and pain.”

KC’s dad Gabby withheld comment. His handler, Therese Ramos, said she had forwarded the Inquirer’s text messages requesting his input on the subject, but that he was “taping… a big scene.”

In an earlier interview, Gabby described his daughter’s love life as “something like a drama series—it’s hard to keep track.”