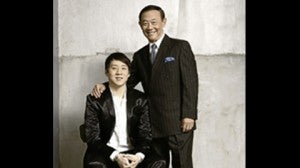 “THE SONGWRITER and the Crooner” concert featuring Jose Mari Chan and Richard Poon goes onstage Dec. 2 at the PICC.

The idea of featuring Jose Mari Chan and Richard Poon in one concert is not exactly a stroke of genius, but nevertheless an interesting one.

The show, dubbed “The Songwriter and the Crooner,” is set on December 2 at the Plenary Hall of the Philippine International Convention Center (PICC).

Chan is perhaps 30 years older than Poon. They have different musical influences, as well as circumstances that they considered challenges in pursuit of their respective careers.

Asked to name three artists who changed his life, Chan said, “I really can’t limit it down to three. Since I was 10, my musical life has not ceased evolving. I listened a lot to the songs of Paul Anka, Richard Rodgers, Neil Sedaka, John Lennon and Paul McCartney, Jim Webb, Henry Mancini, Michel Legrand, Burt Bacharach and many others.”

Poon was able to narrow down his influences: “My mom, Eva Hwang, who was an opera singer in Taiwan in the 1960s; my sister Eva Marie Poon, a singer, dancer, thespian and host; and Harry Connick Jr.”

Chan pointed out the difference between the music of his time and the present. “I always tell my kids that a lot of the songs they listen to today are devoid of melody… Strong, memorable melodies have characterized pop music as far back as the ’30s. I don’t know exactly at what point in time when the melody ‘disappeared.’”

Poon agreed, saying that “the richness and depth of melody” spelled the biggest difference between the classics and contemporary songs. “That’s the main reason jazz standards have stood the test of time.”

As for the struggles they had to deal with, Poon recalled: “My Chinese family feared the financial instability of a musical career. My sister felt I did not have the ‘experiential weight’ (like Frank Sinatra, for instance) to sing standards. I also had my own insecurities—I didn’t believe I could make it as a solo act, because I have always performed with a band.”

Chan, on the other hand, cited the dominance of foreign artists: “Starting out in the mid-’60s as a singer-songwriter was an uphill struggle for me. This was the time of The Beatles, The Beach Boys, Matt Monro, Cliff Richard and hundreds of others. I had to make the rounds of AM radio stations and convince them that my original Pinoy songs were good enough to be aired alongside ‘Ob-La-Di, Ob-La-Da’  or ‘Hey Jude.’ It was tough.”

Poon said his passion for music is such that “I can stay up for so many hours playing guitar, arranging and writing songs, listening to different types of music.”

People should come out and watch his concert with Chan, said Poon, because “if you’re a fan of Tito Joe, what a great Christmas treat for the family. Singing along with his immortal originals would be memorable. I will be singing rearranged old tunes. We will perform a song in Chinese for the Tsinoy crowd.”