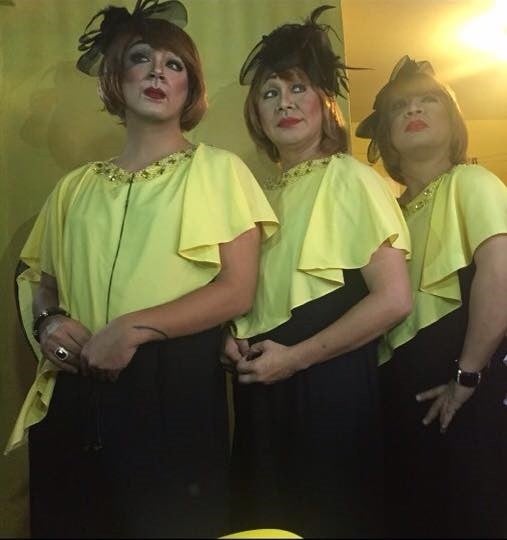 In the latest episode of Eat Bulaga’s hit segment “Kalyeserye” on Friday, the de Explorer’s big secrets are slowly being unveiled.

Lola Tidora’s (Paolo Ballesteros) arrival from Germany on Tuesday and the revelation she brought out into the open posed further complication in the lives of the members of the de Explorer family.

On Wednesday, Lola Tidora claimed that the family’s long time servant Yaya Dub (Maine Mendoza) is her niece, the daughter of her other sister who was still unknown to many.

Lola Nidora (Wally Bayola) has been hiding this truth to Yaya Dub, who was kept out of the loop about the recent events.

She is Lola Tinidora (Jose Manalo).

Lola Tinidora, together with her own set of bodyguards the Quandos, was finally reunited with her sisters after being estranged for many years now.

She said it’s time for Yaya Dub to know their secret.

Lola Nidora reprimanded Lola Tinidora for abandoning the servant. “Iniwan mo ang bata sa akin at bigla ka nawala. Anong klase kang  nanay? Tapos babalik ka nang ganon-ganon na lang, Tinidora? (You left the child with me and you suddenly disappeared. What kind of mother are you? Then you will just come back as if nothing happened, Tinidora?)”

In response, Lola Tinidora made a shocking declaration.

“Hindi ko anak si Yaya. Pinaniwala mo lang ako, Nidora, na anak ko si Yaya. (Yaya is not my child. You just made me believe, Nidora, that Yaya is my child.)” She said, “Wala ako kakayahan magka-anak. Hindi ako magkaka-anak kahit kailan. (I don’t have the ability to bear a child. I will never have a child.)”

Reminiscing the past they shared together, Lola Tinidora had the chance to talk to Yaya Dub again, who until this time remained oblivious of what the siblings were discussing.

Yaya Dub wasn’t able to hear the secrets Lola Tinidora revealed because she was sent to a drugstore to buy medicine for Lola Nidora.

Lola Tinidora later made a hint for her explosive revelation. “Si Yaya o si Divina, siya po ay anak ng nakababata naming kapatid na si… (Yaya or Divina is the child of our younger sibling who is…),” she said.

The real mother of Yaya Dub will be announced on the next episodes of the segment. Arvin Mendoza/RAM

Read Next
Vilma: Not ready to be VP
EDITORS' PICK
Digital hunt for Hyun Bin: 5 challenges for Smartees
Motostrada expands by handing over ‘Trident’ and adding new ‘Horseman’ to its growing business
WHO: Indoor airborne spread of coronavirus possible
House panel set to meet for possible decision on ABS-CBN franchise bid
No arrests to be made on 1st day of allowed pillion riding for couples — HPG
Water remains our saving grace right now
MOST READ
‘I will always speak up for you’: Server on defending Fil-Am family from racist rant
‘Nouveau’: Agot Isidro hits Jinkee Pacquaio’s show of luxury Hermes, Louis Vuitton bikes
Bela Padilla on being tagged a Diehard Duterte Supporter: ‘Nope, not at all’
Solon withdraws support for ABS-CBN franchise renewal
Don't miss out on the latest news and information.