Vilma: Not ready to be VP 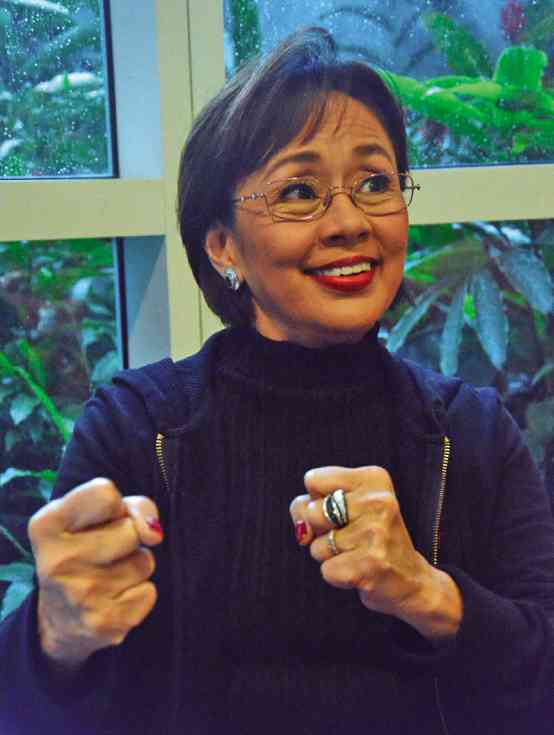 THE ACTRESS-TURNED-POLITICIAN says she prefers a local post. Arnold Almacen

I AM NOT PREPARED for it,” said Batangas Gov. Vilma Santos, denying the rumor that she would be the running mate of Liberal Party presidential candidate Mar Roxas in the 2016 election.

“I haven’t envisioned the position for myself so I don’t think I’d be effective as vice president,” Santos insisted. “Nothing will change my mind. We’re talking about the whole Philippines here—that’s not easy. Being a public servant entails a big sacrifice.”

In 1998, Santos ran and won as mayor of Lipa City in Batangas, where she served for three terms. She is the city’s first female mayor. In 2011, she became Batangas’ first female governor.

“I’m thankful to those who believe that I can do it (to run and eventually become vice president),” said Santos, adding that “there were no formal talks on the issue—that’s why I’m not entertaining it. I’m just surprised to read the newspaper headlines: ‘Mar-Vi, unbeatable.’ That’s just publicity. I still can’t sacrifice my personal life or my family’s for it.”

Santos admitted that she’s eyeing a seat in Congress. “But nothing is final,” she said. “I enjoy serving the people of Batangas. I prefer a local position.”

Santos is convinced that Roxas would be “a good president.” She explained: “I believe that P-Noy has set up a good foundation, and if we want his daang matuwid (straight road, good governance campaign) to continue, Mar is our best option. Mar could work on improving or enhancing what P-Noy’s administration neglected.”

Regarding the news that her eldest son, actor-TV host Luis Manzano, is also running for public office, Santos said: “He is old enough to decide for himself. He knows what this entails. I’ve been a public servant for 18 years. His father (Edu Manzano) was once a politician. His Tito Ralph (Recto, stepfather) is also one.”

Recto is an incumbent senator. He and Santos has a son named Ryan Christian.

Santos added: “I’d like to think that Luis is on the right track. I am proud of him. He is financially independent and plans for his future. I will let him decide. My only advice is, if he’s not prepared for what he would have to give up as a show biz personality, then he shouldn’t run.”

Santos refused to comment on her son’s rumored plan to tie the knot with girlfriend Angel Locsin. “I don’t want to be accused of meddling. I’m just waiting for them to make a decision. I see that they’re very happy together and that’s enough for me.”

With what she has accomplished as a politician and actress, having worked in show business since age 9, Santos said she has nothing else to wish for. “I’m blessed. I’m grateful that I live comfortably. I only pray for good health for myself and my family. I have peace of mind because I was able to save up for my retirement.”

In the yet-untitled movie she is currently filming with Locsin, Santos plays Vivian, a real-estate magnate. “Angel is one of my employees. Our personalities will clash,” she told the Inquirer.

“I agreed to do the film because playing Vivian is very challenging. She is not exactly bitchy, but she’s fierce. I have a stylist on the set to make sure I look good. Even the way I speak is different.”

She conceded: “I really missed acting. This is my first love. Show business is home to me, although I truly appreciate being a public servant. I’m very sure that people put me in position because I am Vilma Santos, the actress. They eventually rated my performance and, I guess, were pleased with it. If they trusted me to lead them for 18 years, then I must have done something good.”