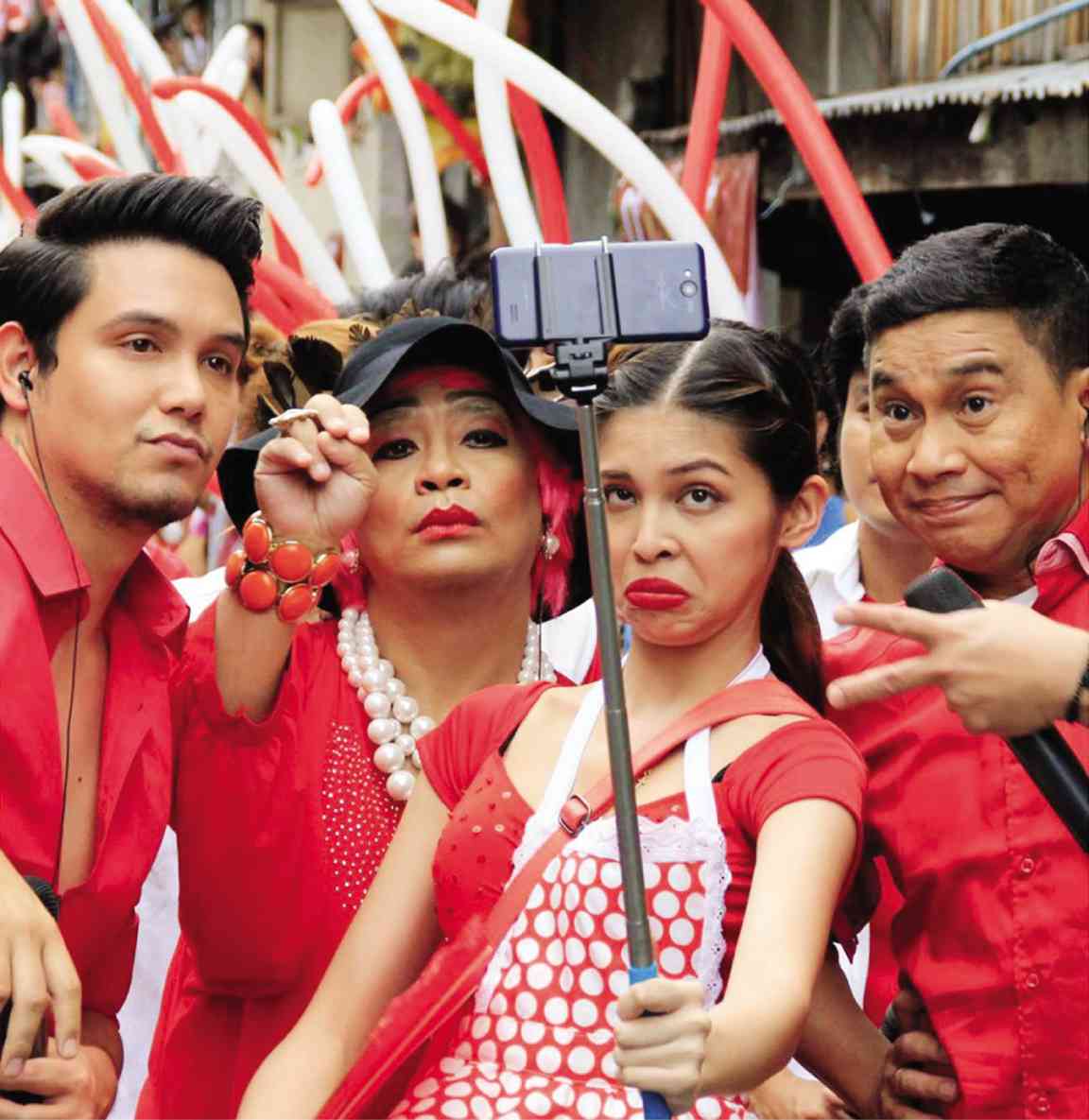 OVERNIGHT SENSATION The popularity of Nicomaine Dei “Maine” Mendoza, better known as Yaya Dub to fans of the continuing “kalyeserye” on the noontime show “Eat Bulaga,” is unstoppable. It has pushed the career of her accidental “love interest,” Alden Richards, to the hilt and has caused the show to triple its ratings. With Yaya Dub are the noontime show’s Paolo Ballesteros, Wally Bayola (in character as Lola Nidora) and Jose Manalo. EAT BULAGA FACEBOOK PAGE

As the Disney song goes, it’s “a tale as old as time.”

Instead of Beauty taming the Beast, however, a not-so-ordinary nanny called Yaya Dub enchants a handsome heartthrob named Alden Richards in this modern retelling of a classic fairy tale.

Called “kalyeserye” or street series, the “AlDub” romance is a certified hit.

It is not uncommon for Makati employees (some working in this newspaper) to delay their lunch break to 1:30 p.m. in order to catch AlDub in the program’s “Juan for All, All for Juan” segment.

Some would wait until the wee hours when the segment is uploaded to the show’s official Facebook account.

That record-breaker was the episode which featured the aborted wedding of Yaya Dub, or Nicomaine Dei “Maine” Mendoza in real life, to Richards’ rival, Frankie Arinolli, aka comedian Jose

Manalo in a ratty Justin Bieber wig. It was the same episode that ended in the ultimate cliff-hanger: Yaya Dub fainting at the altar, once again preventing her face-to-face encounter with Richards.

Although fate and show biz handlers have conspired to keep them apart, what would Richards do should he accidentally bump into Yaya Dub at the mall or in a studio?

“I might end up singing ‘God Gave Me You,’ the Dubsmash way,” Richards told the Inquirer.

A culinary arts graduate who dreamt of becoming a flight stewardess, Mendoza, in an earlier interview, told the Inquirer: “I haven’t met Alden, but I am really looking forward to it … and do the ‘pabebe’ (baby-like) wave in front of him. I’m just worried as to how I would react in front of him.”

For sure, Richards said, “I will be very happy to meet Maine. That will be what Lola Nidora calls ‘ang tamang panahon’ (the right time). I am sure it will be worth the wait.”

Richards believes that AlDub clicked with viewers because theirs is a “fresh team-up.”

He is quick to give credit to the rest of the team, though. “A lot of people are working to ensure our success, from our bosses to our staff and our loyal followers have been very supportive.”

“Now, I believe in forever,” said Mendoza, who never hid that she has a crush on Richards. “Maybe our tandem became a hit because people can see that our emotions were pure.”

“AlDub the ‘uncouple’ never meets and communicates only through television—through cute antics like the pabebe wave. It’s a ‘Cinderella’ story that’s fake and true-life at the same time.”

On- and off-camera, Richards and Yaya Dub have yet to meet and only get to interact onscreen—specifically, split-screen, during their segment on the noontime show.

Sarabia added: “This kind of hide-and-seek courtship is not new.”

The characters are familiar as well, she said: “Like the heartless and powerful old woman who rules over the poor and helpless damsel in distress … who, in turn, relies on a dashing prince—who has more agency and money—to keep his promise of marriage” and happily ever after.

“As in most fairy tales, we never look beyond what happens after the couple marry, engage in sex and have children. That stuff is not funny and the problems will be left for the two to deal with,” Sarabia said.

Indeed, it’s “a tale as old as time, song as old as rhyme,” with a decidedly modern twist that traverses old and new media and thrives in Twitter, Instagram and Facebook.

“Eat Bulaga” director Poochie Rivera shared a theory with the Inquirer: “AlDub clicked because lots of Filipinos can relate with their predicament. People who have partners who work abroad often communicate and pursue their relationship online, through Skype or Facetime.”

The struggles of overseas Filipino workers have somehow seeped into popular culture in the guise of supposedly harmless entertainment.

“AlDub is a new-age love story,” explained Rivera. “There is also this thing called online dating these days, where young people meet, fall in love and sometimes break up in cyberspace.”

The online reference is appropriate because Yaya Dub was first noticed by netizens through her Dubsmash videos —particularly her saucy impersonations of the President’s sister Kris Aquino—on YouTube. Dubsmash is a mobile app used to create selfie videos.

Unlike past love teams like “Guy and Pip” (Nora Aunor and Tirso Cruz III) and present tandems like “KathNiel” (Kathryn Bernardo and Daniel Padilla), AlDub cannot be commended for their on-screen chemistry, though. Rivera quipped: “What AlDub has is split-screen chemistry.”

True enough, the people behind the kalyeserye are not only on the same wavelength, they are in agreement that although what they do on a daily basis seems “natural and unscripted,” it takes scientific precision to make it run smoothly.

Ferre related: “I always make it a point to read viewers’ comments on the show’s social media accounts every day. The tandem clicked because of the right mix of thrill and laughter along with other emotions like drama, suspense, frustration, impatience … all contained in a 30-minute segment.”’

“They are not briefed prior to the show,” Rivera related. “Nothing is rehearsed. We are trying to maintain the spontaneity because that is a big part of its charm.”

“That is a big challenge for us,” Ferre said. “That is something new for us. We are excited ourselves because we do not know what tomorrow will bring. The kalyeserye will continue for as long there is a ‘kalye’ worth traversing.”

Malou Choa-Fagar, senior vice president and chief operations officer of Tape Inc., producer of “Eat Bulaga,” pointed out: “It’s the first time that a love story or ‘teleserye’ is being done on live national TV. The story’s unpredictability contributes to its success.”

Ferre said: “We have blurred the line between hilarity and reality. Viewers are now confused whether what they are watching is for real or scripted. It’s a fairy tale, but instead of a faraway kingdom it is set in a nearby neighborhood.”