From ‘who?’ to ‘Doctor Who’ | Inquirer Entertainment 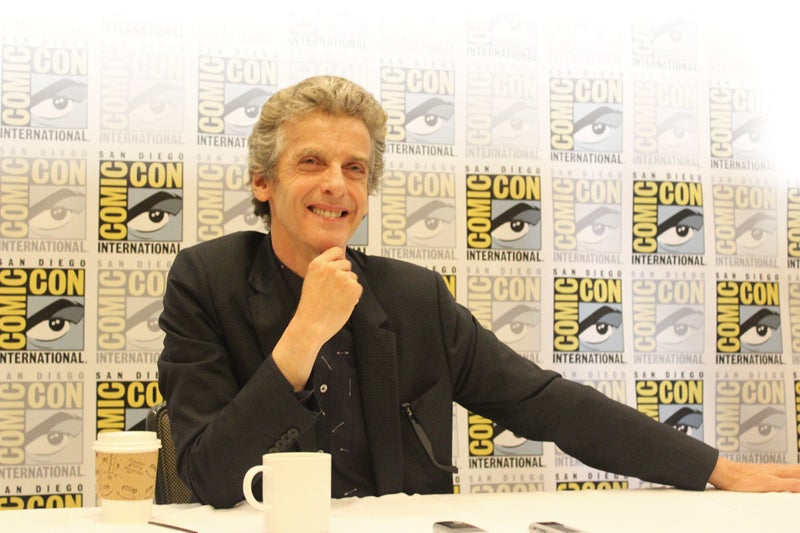 A FORMER fan, actor Peter Capaldi envisions the cult hit as a science-fiction show that can “go from the domestic to the cosmic.” Ruben V. Nepales

LOS ANGELES—While Peter Capaldi has been a British film and TV mainstay for many years, becoming the 12th Doctor is bringing him some worldwide attention. The Glasgow, Scotland-born actor went from being “Peter who?” to The Doctor of “Doctor Who,” a beloved time-traveling humanoid alien in the cult British science-fiction TV show favorite since the series debuted in 1963.

Peter, a delightful raconteur in person, is also a director who won the 1995 Oscar best short film-live action trophy for “Franz Kafka’s It’s a Wonderful Life,” which he shared with Ruth Kenley-Letts. Dressed in a slim fit dark suit and shirt, Peter cut quite an interesting figure, especially with his salt-and-pepper hair and wiry frame.

The following are excerpts from our chat with the actor whose roots are Irish and Italian.

Can you talk about your experience jumping into the character of The Doctor as you go into your second season?

It’s very nerve-wracking and quite scary because the show has attained a scale that I wasn’t used to. The show that I grew up on was a much smaller and intimate thing. But I just had to get on with it and concentrate on my own intimate and personal relationship with the show as opposed to thinking about the size of it and thinking of it as a product or as a big show that was going to go all over the world.

I had to think of it as The Doctor and how this character was changing, what his experiences were and what new and old things we could try to bring to the show. So it was tough but in a very enjoyable way. It was very challenging but great fun because you get to chase monsters up and down corridors. You also get to do wide, emotional and challenging dramatic scenes as well as very good comic scenes.

But it’s a bigger thing than I anticipated being, really. Also, the acting was slightly more difficult than I thought because I thought a lot of kids who have grown up on “Doctor Who,” myself included, have spent a lot of time playing “Doctor Who” in the playground or wherever. But it’s a whole different number. You have to try and conjure the character to life within the format of the television factor that we work in.

How is your Doctor different from the previous ones?

Obviously, he’s got my face and we can start there. He’s much older. Last night, I saw Matt Smith (11th Doctor) who I love and who had a magnificent quality of being very cool and young, but having this very wise old head on his shoulders. We tried to contrast with Matt. Matt is very lovable and accessible but I thought it would be interesting to be less “user-friendly.”

What I wanted to do was create a version of “Doctor Who” that I thought was mysterious, spiky and joyful because I think that is one of the key elements of “Doctor Who”—one who can find great satisfaction and delight in the crease of a tablecloth or in stars being born in Alpha Centauri. That is the nature of the show. It has to go from the domestic to the cosmic in ways that other science-fiction shows don’t do.

I wanted to maintain that joy, intrigue and awe about the beauty of existence. But also bring a more alien quality to “Doctor Who.” He’s not human so I wanted him to be less patient with humans. He doesn’t really care that much about what human beings think of him. But he still loves them.

Before being cast as The Doctor, you destroyed your “geek collection” autographs and letters from the other Doctors.

It was a terrible bonfire of the vanities. I didn’t really have a bonfire, though. I used to write to “Doctor Who” when I was young. I had letters back from the first four “Doctor Who” actors except the first one, who was very ill by that time and his wife very kindly replied to me and autographed a picture for him.

I had a collection of stills. I used to write to BBC and got copies of stills from “Doctor Who.” Of course, my greatest coup, the thing that happened to me that was most influential was that I wrote to the “Doctor Who” office so much that they said, we have got to try to get rid of this kid. The producer—can you imagine this happening today—sent me two scripts from a forthcoming season then, which hadn’t been broadcast yet.

I had never even seen a script. I didn’t know that there was this document that was produced, from which the program was generated. That was the sort of clincher for me. I thought that in some way, I have got to be involved in this world, because I saw how creative it was. I saw that there was a means of making these programs.

But foolishly—it’s a pattern you will see with a lot of the youngsters who love “Doctor Who” devotedly until they are about 16 or 17—then they discover rock ’n’ roll and other things. They put their “Doctor Who” stuff away. But I, unfortunately, decided to purge it all.

Can you talk about the serendipity that now, you are playing The Doctor?

Obviously, it was an extremely unexpected call. The way “Doctor Who” had been going, it seemed to me that the role was going to be headed in a youthful direction with the casting. I was never that bothered and I didn’t expect. I had been in an episode of “Doctor Who” with the wonderful David Tennant. I thought that was as close as I would get to the show that I had loved so much.

But eventually, my agent called and said, “How would you feel about being the new ‘Doctor Who’”? I just laughed so much because it was a kind of circle coming to being brought together. I bring with me onto the set a knowledge of the character historically but I think more importantly, I have a main line to the spirit, if you like, of the show. That to me is most important—keeping alive this strange idea that beats at the heart of the show and that keeps drawing people toward it.

I can’t really articulate what that thing is but I sort of sense it and know it. Like many things on “Doctor Who,” when you are working on this show, you will discover what isn’t “Doctor Who” when you try things. Then you land upon something which is “Doctor Who” and you keep that and hold it close. I think my advantage is that I bring with me a sort of spiritual understanding of the show, which never leaves me. That’s a great help to me when we are shooting.

How do you spend your free time, when you are not being The Doctor?

I don’t really have very much free time. “Doctor Who” takes nine months of the year. At the moment, we are actually in the middle of shooting episode 11. I had pancakes this morning and I thought this is awful, because I want to eat and eat, but I will end up too porky to get into my costume when I get back.

I got to pick up exactly where I left off when I left last week. So I don’t do a great deal except work on the show. I like to draw a bit, maybe noodle a little bit on my guitar, listen to music and go to the theater and the cinema—all of those things.