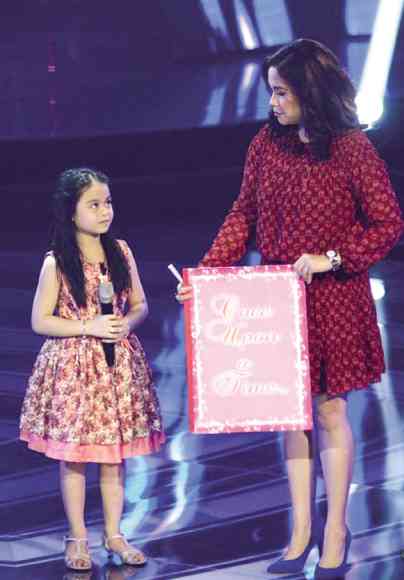 THE AUTHOR (right) at work, with Esang de Torres, one of her team’s Top 6

Emotional roller coasters are part and parcel of this show business world that I revolve in. Through all of the ups and downs, highs and lows, and twists and turns, I try to remain calm, cool and collected.

Last Sunday, the Team Lea Sing-Offs were finally aired. My Top 6 artists (Jonalyn, Akisha, Esang, Luke, Jhyleanne and Reynan) were coached one-on-one, and performed a song that they each selected as one that would represent who they were. The songs were diverse, came from different time periods, and really seemed to hit from wherever their hearts happened to be.

As a performer, whenever I am in control of the microphone and the stage, it’s far easier for me. However, as a coach sitting in the chair as my kids, one after another, sing their chosen pieces, I am a nervous wreck. I am barely breathing during each performance, only able to finally heave a sigh of relief and let out screams of jubilation once the number is over. I know each kid’s anxiety, trouble spots and story, and it’s such a joy when they are each able to triumph over everything they face.

There are memories of schoolyard bullying … witnessing shared-to-single parenthood take place … the death of a beloved grandparent … wishes for a better life … and tribal pride. These are only a sampling of the stories the artists on the show are telling, stories that our audiences are able to relate to.

And now, we have only one more weekend of Sing-Offs left, namely the rounds of Team Bamboo on Saturday and Team Sarah on Sunday. The following weekend, on Aug. 22 and 23, our Live Semi-Finals will take place with all the teams’ Top 2 young artists taking the stage at the Newport Performing Arts Theater, Resorts World Manila. This is when the voting public gets to decide who goes through to our Grand Finale, and who goes home.

Please watch as the kids tell (and sing) their stories and show you their hearts. I guarantee, you will not regret it. 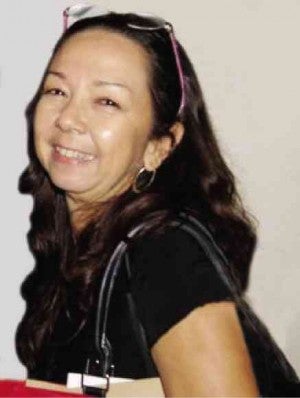 Monday (Aug. 10) started off quite wonderfully, as I was still riding on the high from Sing-Offs the night before. After picking up my daughter from school, we headed to Maria Ressa’s office in Pasig City for an interview focusing on art, technology and leadership. It was more than 40 minutes of bliss getting to converse with her, a time period I felt was just too brief.

Barely 10 minutes after saying my goodbyes to the staff, I got a text from Bobby Garcia.

Not too long ago, I wrote about our fearless and peerless production manager Liza Camus, who had suffered a stroke and was in the hospital. Last Monday, our Heavenly Father called her home. Needless to say, many theater and concert mainstays, both on stage and off, were posting tributes, photos and favorite memories of Liza, saying their goodbyes with eloquence and humor, in the way that crazy theater people could.

Liza was the favorite problem-solver. The calm in the midst of the storm. Always in charge, unflappable, unstoppable, imperturbable. Her loud and lively voice (she peppered her sentences with “Pare”) signaled her presence, and you knew that with her there, you never ever had to worry about anything. In the many concerts, plays and musicals we worked on together, I knew that if a problem came up, she would solve it.

It was amazing how much she was able to accomplish. She knew to whom certain tasks should be assigned, which suppliers to call for what, and which people were the most reliable for each project. And she did it all at warp speed, making it seem like she was in several places at once.

Realizing that she’s gone, it now makes me go through the virtual address book in my head, trying to figure out who can replace her. I’m sure that I can find someone who is more than competent, trained by her to care for the artists, staff and crew in the way that she herself did. As far as the job, what I have learned is that “no one is indispensable.” But she came pretty darn close.

And perhaps being cared for by someone she herself had a hand in training and mentoring will be one part of her legacy. That she left behind a crew of people who knew how she worked, so that at the next play, musical or concert, no one will have to ever worry about anything, that all our questions will be answered in prompt fashion, and that all our needs will be met.

There will not be a human being like her though. Vibrant, energetic, a force of nature, caring, loving, problem-solving. Bobby Garcia considered her his Wonder Woman, as together they “moved mountains and slew dragons.” She was the love of so many lives, including mine.

Goodbye, our wonderful Liza. You don’t have to move at warp speed anymore. But my goodness, Pare, go easy on them up there. (I kind of feel sorry for everyone in heaven; they have no idea what’s coming.)