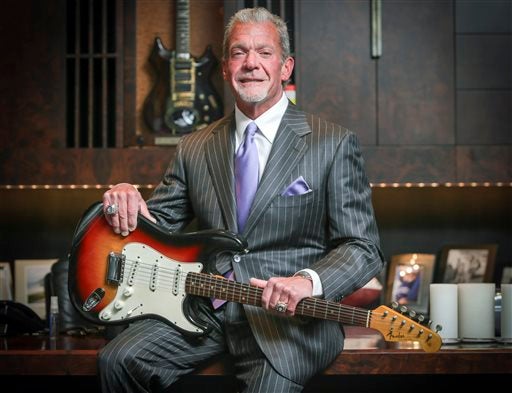 In this June 10, 2014 photo, Indianapolis Colts owner and CEO Jim Irsay holds in Indianapolis the Fender Stratocaster guitar that Bob Dylan played at the Newport Folk Festival in 1965. Irsay purchased it at auction for just under $1 million. Festival producer Jay Sweet said through a spokeswoman Friday, July 24, 2015, the opening day of this year’s three-day outdoor festival in Newport, R.I., that the guitar had returned to the festival to celebrate the 50th anniversary of the performance when Dylan first went electric on stage. AP

The guitar that Bob Dylan used to go electric at the Newport Folk Festival 50 years ago is back in Newport.

Dylan used the Fender Stratocaster in his performance on July 25, 1965, when he strode on stage in a leather jacket and launched into the song “Maggie’s Farm.” The performance drew a mix of boos and cheers from the audience, from some who were thrilled by the performance and others who felt abandoned by someone who until then had been best known for singing protest songs with an acoustic guitar.

The moment is considered one of the most important moments in rock history.

Jim Irsay, owner of the NFL’s Indianapolis Colts, bought the guitar in 2013 for $965,000. It was the most expensive guitar ever sold at auction. The curator of his rare guitar collection brought it to the festival Friday.

This weekend’s festival is paying tribute to Dylan’s performance in a number of ways, including a still-secret lineup of around a dozen acts on Sunday that will not be revealed until they step on stage. The festival is also hosting a discussion of a book out this month that examines the performance, and what led up to it, “Dylan Goes Electric! Newport, Seeger, Dylan, and the Night that Split the Sixties,” by Elijah Wald.

Organizers say they also hope the guitar can be played this weekend, although it has not been played in public in 50 years. It’s not clear yet who will play the guitar, although Sweet has said repeatedly that while an invitation was extended to Dylan, he would not be coming to the festival this year.

The last time he played at the Newport Folk Festival was in 2002.

“It (the guitar) is such an important part of musical history, and Dylan was our generation’s Shakespeare, so it’s our way to give back and share,” Irsay said.