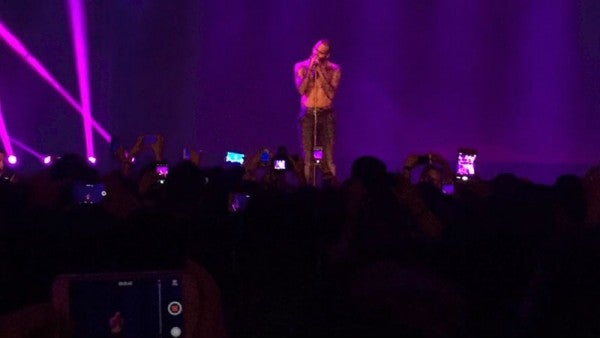 Chris Brown performs before his Filipino fans during his one-night only concert at the Mall of Asia Arena Tuesday night. Photo by Don Lejano/INQUIRER.net

They waited seven long months but judging by the screaming and dancing the Filipino fans showed during his two-hour gig–Chris Brown was well worth it.

A lot of fans were disappointed–some angered–when the popular and sometimes controversial American singer failed to show up last December for the New Year concert party he was supposed to headline at the Philippine Arena. But he more than made it up with them as soon as he emerged from the stage of the Mall of Asia Arena Tuesday night for his second concert in the country.

Performing topless about half of the show, the one-time Grammy winner for Best R&B album turned the concert venue into a dance club with a mix of his new songs and old favorites.

Included in his setlist were Loyal, Wet The Bed, With You, Strip, Take It To The Head, Turn Up The Music, and the hugely popular Forever.

“This is my only my second time in Manila but you know I love my Filipinos,” he told his adoring supporters, which, coincidentally, included a bunch of popular local celebrities.

Jay-R, Edgar Allan Guzman and the Philippine All-Stars fronted for the R&B superstar.

Brown’s first performance in Manila was back in 2008 with his then girlfriend and another R&B sensation, Rihanna.