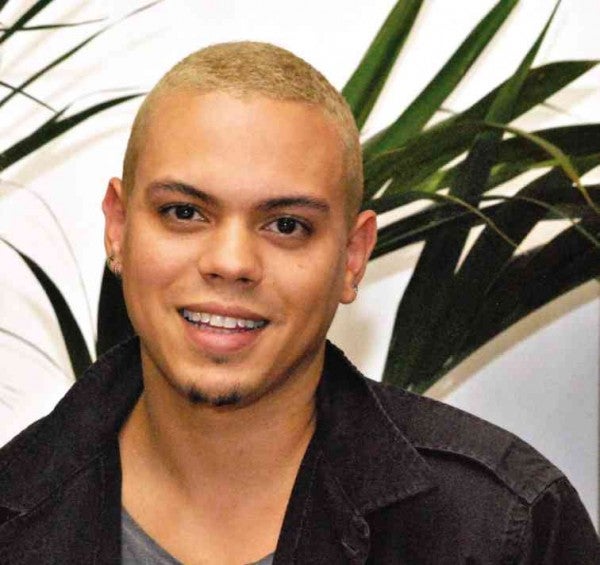 LOS ANGELES—What’s it like to have pop diva Diana Ross for a mom? In a recent interview, singer-actor Evan Ross, Diana’s son with the late billionaire Arne Naess Jr., dished about the glamorous icon as a parent. The husband of Ashlee Simpson plays Messalla in “The Hunger Games: Mockingjay-Parts 1 and 2,” has appeared in several other films and TV movies and released a couple of singles.

Not surprisingly, being Diana’s son has its luxurious perks, especially when Evan and his numerous siblings were kids. “My mom liked to have us travel in first class with her,” said Evan, sporting his trademark bleached hair that’s shaved close to his head. “She’s like, I work for my money and I want my kids to live a certain kind of way. My dad used to get so mad at my mom for flying us first class. So it was a clash on that.”

“My dad wanted to fly coach even though he had a lot of money,” Evan said of his dad, who was a Norwegian businessman and mountaineer. “He liked to be in coach and he was like, ‘I don’t see the point of it.’”

“They were so different,” Evan added about his parents who were married in 1985 and divorced in 1999 (Arne died in a mountain climbing accident in South Africa in 2004). “We would travel to Switzerland and stay at my dad’s house. My mom would bring bags and bags of clothes and all the kid stuff that we wanted. She was like taking the whole house (Diana’s in Connecticut) and moving it to Switzerland for a month. My dad used to be like, ‘Oh!’ because he lived a very simple life. No fancy cars, jeeps or things like that.”

But Evan claimed that his fabulous mother also instilled in him, his brothers and sisters an appreciation for stuff deeper than flashy cars and gadgets. “When you grow up and like fancy stuff and if you go through that stage wanting the cool car and everything like that, my mom, who for a long time drove a Jeep Ram, was like, ‘At some point, you are going to realize all that fancy stuff doesn’t matter. The only things that matter are your family and love.’

“And the material things—she’s like, ‘What am I going to do with all of that stuff? It really doesn’t matter. It feels like it matters at some point. I see many people my age very concerned with all of that.’ I am lucky to have someone like her to always remind me that that’s not what is important.”

Evan credited both his dad and mom for his values. “Both my parents did (teach us values),” Evan stressed. “My mom always made sure that we knew that none of this stuff was just handed to us. Both my mother and father worked for everything that they had. It was never treated as though we deserved anything, like no one was better than anyone else.

“It was amazing that we were able to have the life that we had, seen the things we did and got to travel like we did because of what they have done. It was never something that was treated as though this is for you only. When we were little, we had chores. We did get a lot of great things. I see a lot of kids now that don’t get told as much as we were. We weren’t allowed to step out of the bubble and just do what we wanted.

“If we were ever out of line, we were put in line. I think it’s just the way your parents treat it from the beginning.”

Asked to describe Diana as a mother, not the glam diva that fans see onstage, Evan quickly answered, “She’s the most amazing person I ever met. I am inspired to be like her. I am a fan of hers, like an actual fan, even though she is my mother. When she walks in, there’s an energy that fills the room. There’s nothing like it. It doesn’t matter where she is. You can feel her in the room.

“I never really saw my mom as Diana Ross. My mom was my mom. When I look back, for her to juggle both lives is really incredible. I remember when the Concorde was still around. She would fly on the Concorde to London, do a show, fly back the same night and take us to school in the morning. So we never really felt like she wasn’t there. She still cooks for us. Every time I go to her house, she’s cooking something. She’s a mom, more than anything.”

He added, “She’s a special human being and she will do anything for her children.” That includes officiating at Evan and Ashlee’s wedding in the singer-actress’ sprawling estate in Greenwich, Connecticut, in 2014. And singing at the party after the rites. 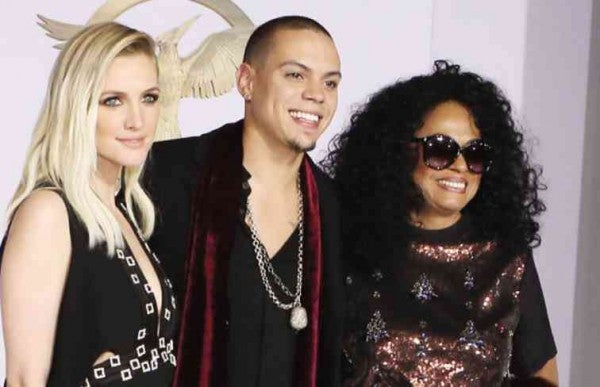 “That was amazing,” Evan recalled with a smile. “She married us and sang at the wedding. She told me she wasn’t going to sing. She was like, ‘Stop telling people I might sing.’ I was like, ‘I am saying it’s possible you will, but I am not telling anyone.’ She was like, ‘I am marrying you guys but that’s it.’ And she was amazing at marrying us. It was the most beautiful wedding ever. She also put on the whole wedding—she and Ashlee’s mom, Tina.

“There were moments when she was trying to make sure she could read everything and not cry. While the party was happening, I was talking to somebody and all of a sudden, I could hear the music change to ‘Endless Love.’ I just heard her voice. It was crazy, amazing and I wasn’t expecting it. Because if she says she’s not doing something, she’s not doing it.

“But I guess she had planned it. She performed for Ashlee and me. We actually have a video of the whole wedding. It’s epic. She sounded unbelievable. It was really special when she sang ‘Endless Love.’”

Evan volunteered, “All of them were there for the wedding.” “Them” are his siblings: Ross, his brother from the Ross-Naess union; three maternal half-sisters (Chudney, Rhonda and Tracee Ellis); paternal half-brothers and half-sisters (Christoffer, Nicklas, Louis, Leona and Katinka).

Evan gave an update on some of his siblings: “Leona is in New York with her beautiful children whom I see all the time. Katinka is in London with her children. Christoffer is in London. My two youngest brothers Nicklas and Louis are in Norway.

“I speak to Nicklas and Louis all the time. My mom is really close to all of them as well. We are all on a text group with each other where we can share things with each other and what’s going on.”

Music is, of course, a big part in Evan and Ashlee’s home. He proudly pointed out, “We have made records together. We have a song that is unbelievable called ‘Permission to Love.’ Obviously, my stepson Bronx and his father (Pete Wentz, Ashlee’s ex-husband) are also into music so it’s a house full of music. Bronx sings all the time, too.”

Evan, who’s working on his debut album, had trepidations at first about singing in front of his legendary mom. “Other people would tell me, ‘You can sing.’ She knew. She would hear me once in a while and she would be like, ‘I heard you—you sound so great.’ But I was nervous to do it in front of her for a long time. I was taking (voice) lessons when I was very young.

“Then I sang at her show years ago in Greenwich, Connecticut, when I was in high school. She was blown away because she didn’t hear me sing up until that performance. I sang ‘Overjoyed’ by Stevie Wonder. I was so nervous.

“She was so taken aback by it. She was like, ‘This is what you should do.’ I was like, ‘I am doing it.’ Over time, you start building that confidence. It’s not like an overnight thing. I am still in the process of fully trusting myself. As an artist, I am trusting that every little thing that I do can be right. It’s part of the process.

“I knew I wanted to do this from the beginning. Everybody in the family knew that, too, especially my mom. I grew up listening to Michael (Jackson). I was around music every day. I remember when we watched my mom’s performances. My brother (Ross) would fall asleep sometimes because he was so young. But I would stay up through the whole thing.

“I would also sit in the dressing room with her. It was so interesting to watch her go from my mom to what people know as Diana Ross.

“I kept telling my mom to allow me to start really getting into it. I was like, ‘I want to go to LA. I want to do music.’ She was like, ‘Get through your school stuff first. Then you can go and do it.’”

As a tribute to both Diana and Arne and to make sure their coming first baby (a girl) together has an official connection to the grandparents, Evan and Ashlee filed requests to change their last names to Ross-Naess.

What does he think his first child (Ashlee’s second) will get from him? “I think she’s going to be hyper a little bit,” he answered with a laugh. “Hopefully, she wants to entertain because I would love her to be dancing around and do whatever she wants to do, entertain, have fun and just be free-spirited.”