By: Allan Policarpio and the Entertainment Staff
Philippine Daily Inquirer / 01:00 AM June 28, 2015

But when they finally embraced, Rhian flinched. She felt Glaiza’s skin and it smelled of lotion. She was smaller, skinnier, softer, Rhian related—so different from her past leading men.

That made Rhian realize that she should open herself to the idea of falling for another woman. “I can’t go on thinking the way I did,” she said during a visit to the Inquirer main office in Makati City.

With each taping day, it became clear to the 24-year-old actress that this show was more than a just a job; it was an exercise in self-discovery. In the soap opera, Rhian plays Jade, a socialite and scion of a wealthy Filipino-Chinese clan, who realizes that she is a lesbian.

What’s the feedback from fans?

Rhian Ramos: They contact us, comment on the show, and send us fan art, fiction and memes. They’re creative, witty and funny.

Luis Alandy: They even put English subtitles on the promo videos and teasers.

Has the Movie and Television Review and Classification Board (MTRCB) called your attention yet?

LA: No, but I think the MTRCB should be more open.

RR: There are lot of things that I would be allowed to do…with a male partner, that I can’t do with Glaiza. Things that come naturally in a relationship. When I greet my boyfriend, I usually kiss him on the cheek or lips. Glaiza and I can’t do that in the show. But I like the MTRCB because it keeps our young people safe. However, rules can be limiting for actors.

Do you think the audience is ready for those scenes?

Are there specific rules on what you can and can’t do onscreen?

RR: I can’t be in bed with Glaiza at the same time, even when fully clothed. It’s a given that we can’t kiss on the lips. We can kiss each other’s hands or cheeks, but it depends on the context. If you’re doing it as if you’re lovers, it’s a no. But if it’s something casual, then that’s OK.

Do these limitations challenge you as actors?

RR: We have to make things look as realistic as possible. We do a lot of intense staring in the show! 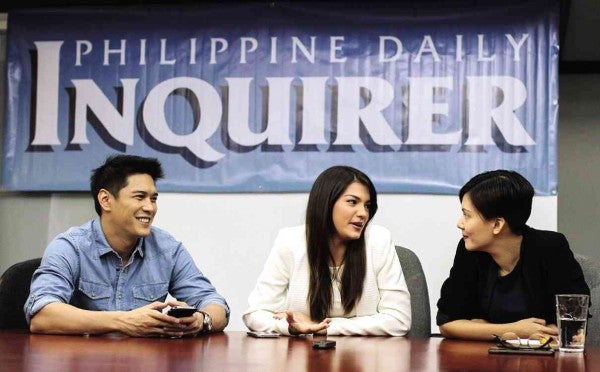 What’s it like being surrounded by all these women, Luis?

LA: I know my place in the show. This is more about the women…But I will have my own moment. The dynamic is also unique. Normally, I would confront another guy. But this time my rival is a girl. I’m seething, but I can’t physically hurt the third party because she’s a girl.

CO: What’s nice about how (head writer) Suzette Doctolero crafted the show is that everyone has a specific arc…It’s not solely focused on the love story.

Some fans say that your acting is “too natural,” Chynna?

CO: Yes, I get that a lot. What do they want me to say? (Laughs) They also tell me that I look better as a boy.

LA: Chynna is really pushing herself as an actor, playing someone that’s completely different from her real self.

RR: It’s as if people are waiting for an admission from us that we’re going to jump to the other side of the fence! We get a lot of messages saying, “Please, let it be real!” or “Don’t lead us on.”

What have you learned about the lives of lesbians?

CO: How big the community is. An old coworker came up to me and congratulated me. I never knew that she was a lesbian. I never thought about her that way. I realized that society puts labels, but we’re all the same.

RR: Yeah, what differentiates a lesbian from a straight girl? Nothing.

What if your girlfriend leaves you for another girl in real life?

LA: You’ll just have to accept it. It happens.

Are you glad that GMA 7 is doing this show and that lesbians are being represented on television?

LA: I’m not saying it’s a first in Philippine entertainment, but it is a first on local television. It’s very brave of GMA 7.

CO: It’s not easy for a network to produce something that will surely garner mixed reactions from people. I’ve been talking to members of the lesbian community and they’re very happy. Some of them were quite jealous of the results of “My Husband’s Lover,” so they feel it’s about time that they are given a voice, too.

RR: Glaiza related to me that a woman just walked up to her, and introduced her companion, saying, “She’s my Jade.” It’s nice to have a show that represents different kinds of people. I’m proud that the station is brave enough, because we all know that in local show biz, it’s all about formula and playing it safe.

In the end, it’s a business, a lot of money is involved. So to come out with a show that is risky…that’s great.

What are the changes you want to see in society?

RR: I want people to…simply respect each other…For people to try to understand our differences. That’s my No. 1 hope. The show is here to promote the search for personal truth.

CO: To broaden people’s horizons and open their minds…We do have that responsibility as artists. At the end of the day, we should promote love and accept our differences.

LA: We’re pushing for equality…We want to push the message that the truth will set you free.

What attracted you to do the role?

RR: What really makes me do a project is when the character and I are very different. That means I will be challenged and learn more about myself.

To attain self-discovery, I think you have to challenge the things you believe in. And when I started playing Jade, that’s exactly how I felt.

What have you learned from doing the show?

RR: It gave me a better understanding of people in general. I never considered myself a judgmental person. But I’ve realized that we have a tendency to put people in a box when we don’t even know the real situation…So every day when I go to work, I tell myself that I really have to open myself up to the possibility that I could fall in love with another woman.

CO: I’ve learned that it’s OK to tap into our masculine side and be comfortable with it. I feel that it has made me a better person in the end. I used to say that I hated being a woman and that men don’t know how hard it is to be one. But now I’ve become more appreciative of who I am.

What else have you realized?

CO: The effect has been good because this series not only sharpens our craft, but it makes us look deeper into ourselves. I’m proud to say that I’ve learned a lot so far.

Do you think you can fall in love with a girl?

RR: I don’t know if it could happen or not. I used to think that I know who I am and know what I like. But now, who knows?

Have you encountered bashers?

RR: One person called me immoral. But I think it’s worse to be so judgmental toward other people. I didn’t reply or defend myself. Everyone else did it for me.

CO: Some people criticize GMA 7 for casting straight people as lesbians. They are like, “Why don’t they just hire real lesbians for the job?” But we’re just playing roles.

RR: I wonder if Chinese people are mad that we aren’t really Chinese!

Here are some questions from our Twitter followers: Will the show be extended?

RR: It doesn’t matter to me if the show gets extended or not. The victory is that the show happened in the first place. There are a lot of shows that are extended for the sake of being extended. I’d rather this show go out with a bang. I’m after quality, not quantity.

LA: It would be a good idea to have a break between seasons. So that the production team could work on the story. While we actors will be given the chance to form a fresh perspective on things.

Have you and Glaiza become best friends? Do you have pet names for each other?

RR: We become closer with each taping day. She’s such a cool girl. Are we best friends? Probably not yet. But it could happen. Pet names? Sometimes we call each other “love-love.”

What is the most touching message you’ve received from fans?

RR: We get messages saying that they’ve become more comfortable with who they are…and with the idea of coming out to their family. It’s a beautiful thing.

Never in my wildest dreams did I ever think I’d be given the chance to do a show like this. It’s not all about entertainment or escapism. If I can leave the audience with a lasting impression, that would be a huge honor.

CO: Someone came up to me and started crying, and opened up about her own experiences. She said she admires the show’s perspective and thanked us for speaking up for them.

Do you miss your hair, Chynna?

CO: Sometimes, but I do like it this way. I’m a 1990s kid and a Winona Ryder fan. I can always grow it back after the show.

What do you do between takes?

CO: There are always good vibes on the set. We chat and play around. Sometimes I upload videos of us dancing…just being silly.

CO: It just comes naturally. But it’s OK, I just have to accept it! (Laughs)

What’s your message to the MTRCB?

CO: I really want a deputy card. Seriously, I just hope that they trust the entertainment industry the same way we trust them. I don’t think anyone wants to put out a series that would purposefully destroy the beliefs of our society.

RR: I’m not really sure how they look at us…But I think it’s a necessary entity to help guide and educate the people, especially since the media is so powerful…It should call people out when they do something wrong, not if it feels they’re about to do something wrong. We deal with love—not violence—in the show, and there are things that I find limiting as an artist. In the end, we just need to be more responsible.