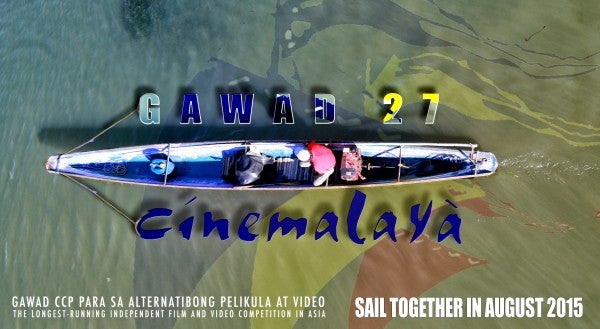 The Cultural Center of the Philippines is accepting entries to the Ika-27 Gawad CCP Para sa Alternatibong Pelikula at Video, Gawad Alternatibo, for short (CCP Independent Film and Video Competition) until July 3, 2015.

Entries must be submitted not later than 6 pm, at the CCP Film, Broadcast and New Media Division (formerly Media Arts Div.) at the 4/F, CCP Main Building, Roxas Boulevard, Pasay City.  Entry forms, guidelines and mechanics can be downloaded from the CCP website at www.culturalcenter.gov.ph and Cinemalaya website at www.cinemalaya.org

Entries to the competition may be in DVD and MiniDV formats for Video.  Competition categories are: Short Feature/Narrative, Experimental, Documentary and Animation. All works submitted to the competition must be strictly independent works and not produced for commercial screening. These works must not have been completed earlier than October 2014. Each participant may submit a maximum of three entries in each category.

All entries to the competition will be screened from August 8, 9 and 11, 2015 at the CCP Tanghalang Manuel Conde.

Cash prizes and certificates will be given to winners of the different categories.  Special Awards will be given for Best Regional Entry and Best Entry For/On/By Children. Honorable mention may be awarded by the jury.  Winners of the competition will be announced in the awards ceremony on August 11 at the CCP Tanghalang Manuel Conde.

Starting this year, the Gawad Alternatibo will be part of the Cinemalaya Philippine Independent Film Festival and Competition now on its 11th year to be held on August 7-15 at various CCP venues and Ayala Theaters.

Established in 1987, the Gawad Alternatibo is considered the longest-running independent film competition of its kind in the Asean/Asian region. Many of today’s outstanding filmmakers and media practitioners are alumni of Gawad Alternatibo.