Kris Aquino lambasts netizen for ‘meddling in her family’ 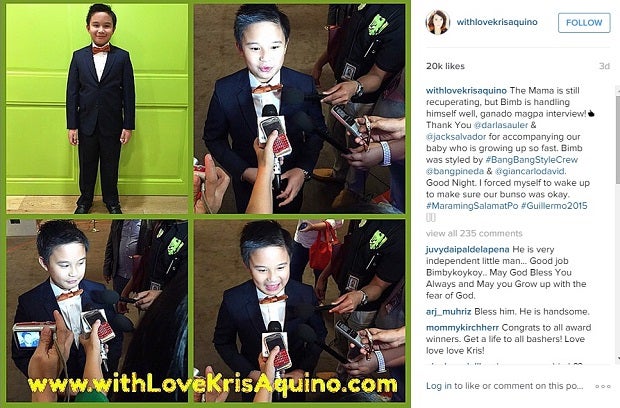 Actress-TV host Kris Aquino posted on Instagram these pictures of her son Bimby when he attended the 46th Guillermo Mendoza Box-Office Awards night Sunday night. He was named Most Popular Male Child Performer. A comment by a netizen prompted a sharp response from Aquino. INSTAGRAM SCREENGRAB

“You don’t know us personally.”

This was the response of an irked Kris Aquino after one of her followers on Instagram asked why comedian Vice Ganda and not James Yap accompanied her son Bimby during the 46th Guillermo Mendoza Box-Office Awards.

On Sunday, Bimby was named as the Most Popular Male Child Performer during the Guillermo awards in Pasay City but neither Aquino nor Yap was able to accompany their son to the awards night.

The honorary stepfather referred to by the netizen was comedian Vice Ganda, a close friend of Aquino.

The TV host-actress made a lengthy reply to the netizen who “[made] pakialam sa buhay pamilya namin.”

Aquino explained that Bimby was still hurting from a misunderstanding he had with his father, James.

“I text James regarding a Father’s Day merienda for him w/ Bimb any day next week. He said Wednesday. “You don’t know us personally, you don’t know how much I needed to make pakiusap kay Bimb na mag merienda sila,” Aquino said.

“I got home from taping & he was still crying from their phone conversation.”

The celebrity then said: “Stop making it about my lack of effort, the fact I initiated for Bimb to see his dad even though my son still has hurt feelings means I have the ability to process emotions maturely.”

This is not the first time Aquino responded to a basher on her Instagram. In January, a fuming Aquino also responded to bashers who called Bimby “gay.”

Read Next
Foo Fighters ends Europe tour after vocalist’s stage fall
EDITORS' PICK
SSS: Members on home quarantine due to COVID-19 can apply for sickness benefit
Mobile COVID-19 vaccination for commuters, transport workers set at PITX
PH to send 584 athletes, 161 officials to Vietnam SEA Games
Gear up and get ready to play with Yamaha Mio Gear
Kalinga, Ifugao, Mt. Province, N. Samar will be under Alert Level 4 from Jan 21-31
Acer starts the year off strong with the Aspire Vero National Geographic Edition
MOST READ
Imelda Marcos trends on Twitter after octogenarian jailed for allegedly stealing mangoes
Mayor Vico counters vice mayor: ‘Did I say anything about his family?’
PH 51st on list of world’s most powerful militaries
‘Unbelievable!’ Pacquiao hits DA’s plan to import 60,000 MT of fish
Don't miss out on the latest news and information.