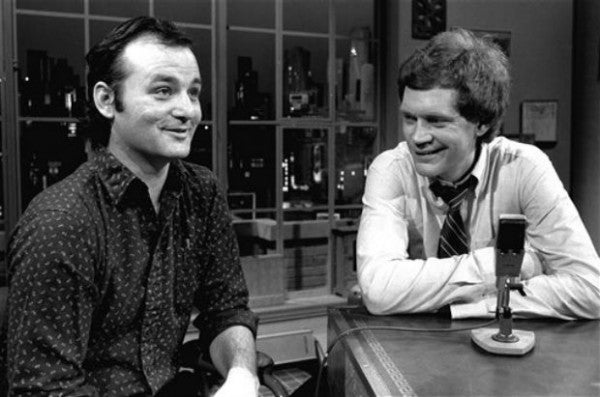 In this Feb. 1, 1982 file photo, host David Letterman, right, and guest Bill Murray appear at the taping of the debut of “Late Night with David Letterman” in New York. After 33 years in late night and 22 years hosting CBS’ “Late Show,” Letterman will retire on May 20. AP

NEW YORK — The Top 10 list on David Letterman’s final show before retirement on Wednesday, delivered by celebrities. The category was “Things I’ve Always Wanted to Say to Dave.”

10. Alec Baldwin: “Of all the talk shows, yours was the most geographically convenient to my home.”

9. Barbara Walters: “Did you know you wear the same cologne as Moammar Gadhafi?”

8. Steve Martin: “Your extensive plastic surgery was a necessity and a mistake.”

7. Jerry Seinfeld: “I have no idea what I’ll do when you go off the air. You know, I just thought of something. I’ll be fine.”

6. Jim Carrey: “Honestly, Dave, I’ve always found you to be a bit of an over-actor.”

5. Chris Rock: “I’m just glad your show is being given to a white guy.”

4. Julia Louis-Dreyfus: “Thanks for letting me take part in another hugely disappointing series finale.”

2. Tina Fey: “Thanks for finally proving men can be funny.”