Broadcast journalist Doris Bigornia on Wednesday broke her silence regarding her alleged misbehavior during the Manila concert of the band The Script on April 17.

“Today, I am breaking my silence to air my side and to set the record straight on an article posted on Facebook by Mr. Richard Lim complaining about my behavior while watching a rock concert by The Script last Friday.

“When The Script came out on stage, many among the audience stood up and welcomed the band. Like them and many others, my daughter and I rushed to the front or the mosh pit to get close to our favorite band, which is typical in all rock concerts. 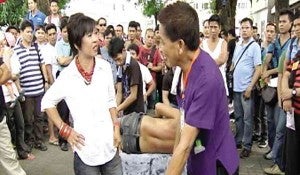 “I apologize to Mr. Lim if our actions caused any inconvenience or upset him and his son in any way. It was certainly not our intention to do so.

“However, it is not true that I made a harsh statement when Lim complained that his son was hyperventilating. Knowing the pain of losing a loved one, I would never have uttered such an insensitive statement.

“After the concert, my children and I were happily talking about how much we enjoyed the show when Mr. Lim came and confronted us.

“When Mr. Lim said hurtful words to my children, I had to step in. My maternal instincts took over.

“That argument should not have taken place,” Bigornia said. NC/RC