Actress Rhian Ramos admitted on Wednesday that she was still reeling from shock after learning that she would be replacing actress Marian Rivera for the lead role on GMA network’s upcoming lesbian-themed series “The Rich Man’s Daughter.”

On Friday (April 17), GMA network confirmed in a statement that Marian had withdrawn from the show as well as her TV appearances abroad due to her delicate condition, following her announcement on April 13 that she was expecting her first baby with husband actor Dingdong Dantes.

Rhian shared that she was having dinner with her boyfriend on the night she received an email from the soap’s production team, asking if it was okay with her to do the role.

“[My] phone was going crazy. There were lots of messages coming in and I wasn’t minding them. I thought they weren’t important. When my phone kept on vibrating, I decided to check it. Then I saw the [message].”

She said she learned that the taping would start on Monday (April 20). “I was in shock … I honestly wanted to vomit. I was, like, hyperventilating. And I really didn’t know what to do.” 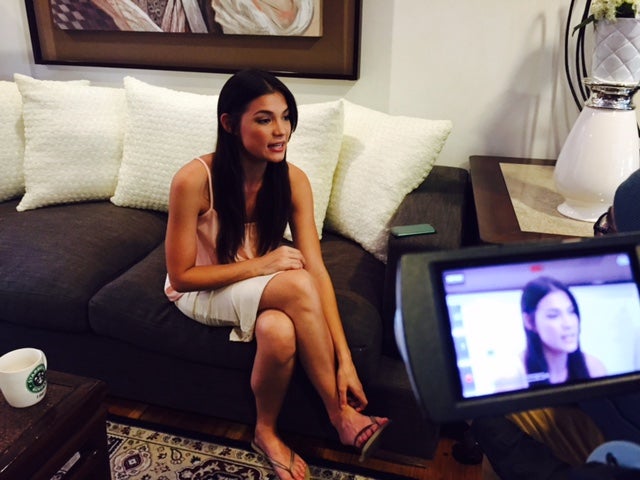 “I really panicked because when I am off [making] soaps, I busy myself with other things, and that time I was having a meeting about this business I wanted to put up. My mindset was there and I wasn’t thinking I will get a show anytime soon,” Rhian said.

“My best friend Bianca (King) was there, and I said ‘B what am I gonna do? I don’t know if I can do this because, if I accept it, what if I can’t be good by Monday?’

“And she said, ‘Kaya mo yan, bagay ’yan sayo … matapang ka rin naman tumanggap ng role (You can do it, the role suits you. You are confident in any role).’ She was telling me this was a good thing,” the actress said.

Rhian said she was flattered and blessed to be chosen to portray Marian’s character. “I see this project with so much importance and I really wanna do well. I really wanna give it my very very best.”

Rhian had started shooting the scenes Marian did before her departure for the first few episodes of the series which would begin airing on May 11.

The actress said she was still working her way around the project since her coactors had been onboard way before she started.

Rhian plays the role of Jade Tanchingco, the youngest and only daughter and an heiress of a wealthy family. Her father will announce that he is looking for a suitor for her and is willing to pay millions to any man who can make her fall in love with him. Then she meets Althea, the girl that will ultimately change her life. RC