Fun chat with stars ‘Chris One’ and ‘Two’ | Inquirer Entertainment

Fun chat with stars ‘Chris One’ and ‘Two’ 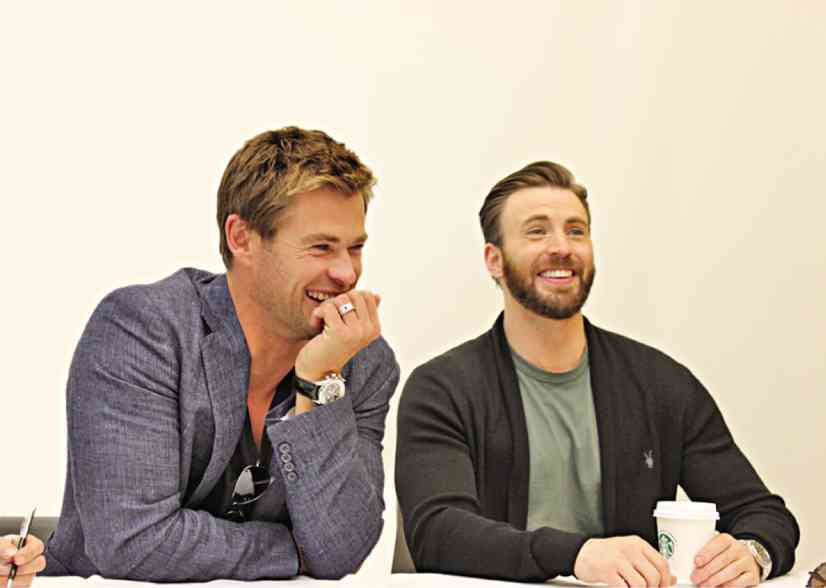 CHRIS Hemsworth (left) says working on the set with Chris Evans was like being back in high school.RUBEN V. NEPALES

LOS ANGELES—Captain America immediately took over while Thor could only mildly protest. Chris Evans, paired with Chris Hemsworth in a recent chat at the Walt Disney Studios lot in Burbank, California, jokingly proposed how they should be identified for convenience in transcribing: “Let’s do this, Chris One (points at himself) and Chris Two (points at Hemsworth). Chris Evans, also known as Chris One. Let’s continue.”

Evans, two years older than Hemsworth, right away established that he’s the voluble of the two. But Hemsworth, while a bit more low-key, can dish some funny ones, too. The Australian actor said that filming “Avengers: Age of Ultron” was “like being in high school with Chris, especially.”

This interview felt like that, too. The two have obviously become buddies. And being paired together for media interviews for the past few days was making their banter looser and funnier.

Hemsworth is taller and bigger than Evans, with biceps seemingly threatening to burst free anytime from his blue jacket’s sleeves. When Hemsworth was addressed as Chris Two, following Evans’ teasing instructions, the Aussie objected with a laugh, “Don’t call me that. Call me Chris One.” But Evans playfully relished it: “You just made my day!”

Hemsworth and Evans, born in Melbourne and Massachusetts, respectively, were asked what parental advice stood out in their mind to this day.

Evans, his blue eyes smiling, answered, “My parents told me never to trust anybody. I don’t know if it was a good thing but when I first moved to LA, my mother was adamant—‘Don’t trust anybody.’ I don’t know where she thought I was going. But she thought that moving from Boston to LA was like going to this horrible land full of piranhas. She really instilled in me—‘Don’t believe anything anybody says; don’t trust anyone; your family is your family and that’s it.’”

“So I came to LA just not believing anybody and with my guard up. But you realize that’s not the case. There are plenty of people out here who are worthy of being trusted.”

Hemsworth, speaking in his low voice, said, “My parents said the opposite. They said, ‘Whatever it takes—you sell that body. You sell that soul. We don’t care. We are hungry. We have to eat. Get out there, kid!’”

We all erupted in laughter. 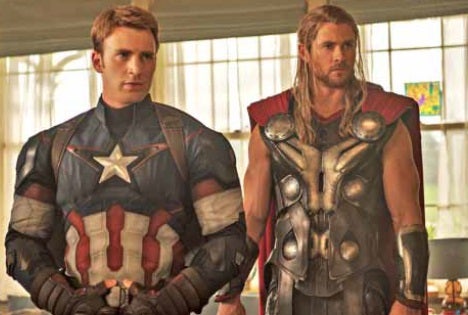 IN COSTUME, the two Chrises as Captain America (left) and Thor

Hemsworth added, “My parents said, ‘Have fun. The couch will always be here.’”

The hulking Australian was even more endearing (sorry, Evans) in his answer to our question about the coming Manny Pacquiao-Floyd Mayweather Jr. fight. Who are they rooting for?

“Pacquiao!” Hemsworth exclaimed. “I trained a bit with Justin Fortune, who is Pacquiao’s strength and conditioning coach. I know a little bit of that camp. I am just a fan. I am a fan of Floyd Mayweather as well but I would like to see Pacquiao win.”

Evans, pumping his right fist and referring to my reaction over Hemsworth’s answer, quipped, “He’s like, ‘Yes!’ Good.” His own answer: “If I have to play the safe money, I am going for Mayweather. But it’s going to be a good fight.”

With Hemsworth being a father of three kids (India Rose, born May 2012; and twin sons, Tristan and Sasha, born March 2014), and Evans a bachelor, the two also gave funny opposing answers on their sleeping habits.

“I will bet our landscapes are pretty different,” Evans began. Hemsworth cracked to his single pal, “Do your kids wake up at about 5 o’clock?”

Evans chuckled and quipped, “I am going to bed at 5 (in the morning) and you are just rising.”

“We both get minimal sleep for different reasons,” Hemsworth riposted with a naughty smile. “Oh, Chris Two! You are the best,” Evans said.

Hemsworth shared, “The kids wake up pretty early and begin their little band of mischief and fun. My daughter is down by 8 (in the evening). There’s a good 30 minutes of TV for me and then I fall asleep myself.”

Evans cracked, with matching sly grin, “I find my own little band of mischief and fun where there’s only about 30 minutes of sleep involved.”

Hemsworth said of the screenplay, which Joss also wrote: “Joss’ script is the bible. If you have something better than it is, sure, attempt to bring it to the table. But I didn’t. I followed what he had on the page. But very early on, in my discussions with Joss, I suggested, let’s make Thor funnier and more relatable, to have fun, ground him and get rid of that kingly God sort of aspect of him because that very easily makes him distant from the audience.”

Hemsworth reiterated that the jocular mood pervaded on the set as well, especially the last few days of filming. “You are just trying to focus, not laugh and mess around. It’s like being in high school with Chris, especially. A number of times Joss would tell us to shut up and focus because we are just old friends catching up with each other since the first movie. We are very appreciative.”

Evans deadpanned, “It was miserable, awful, like pulling teeth.” Then he added, “In a superhero movie, you are playing larger-than-life characters so inevitably you are going to have this kind of fun. It’s like summer camp.”

In the star-studded movie, the heroes must reassemble in order to fight a technological villain, Ultron. Asked how tech savvy they are, Evans dished, “Chris is now on Twitter! Four whole tweets! He’s exhausted.”

Hemsworth smiled and admitted, “And someone else helps me write those. I am oblivious to how it works. You try and think you don’t need it. Then you realize this is where it’s moving toward. So you try and head in that direction and you better step on it or be left behind.”

Evans said, “I can remember trying to explain to my parents how to get online. I am sure my kids are going to laugh at me whenever I don’t know whatever the next technology is going to be.”

On how having kids changed his life, Hemsworth replied, “God, in a lot of ways. I have a new focus and reason for doing things. It took the attention to yourself which is refreshing. I had plenty of internal conversations for years about me and me and me. Now, it’s about them (his kids), how I can help them and what can I set up for my family. It forces you to look at life in other ways. You do become less selfish.”

Has it made him a better man? “Oh definitely. I hope so,” Hemsworth answered. The bachelor Evans, ever joking, reacted with, “Now, I am a piece of s***.”