Fil-Am ‘The Voice’ contestant proud, happy to have ‘come out of my shell’ | Inquirer Entertainment

Fil-Am ‘The Voice’ contestant proud, happy to have ‘come out of my shell’ 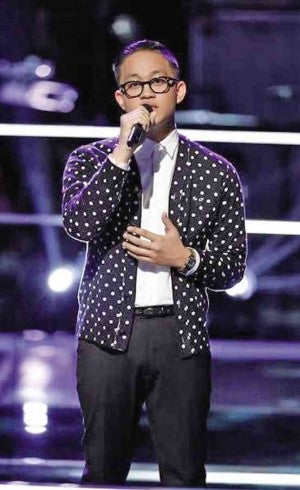 IN SCHOOL, Nathan Hermida was part of the Filipino Club, where he got to dance tinikling.

“My music idols are Justin Timberlake, Usher and Frank Ocean,” said Fil-Am Nathan Hermida, erstwhile contestant on the US talent tilt “The Voice,” in a phone interview.

“I really respect their music… I grew up listening to them,” recounted the bespectacled 17-year-old, who was very recently eliminated from the competition. He made it up till the top 20.

Growing up, Hermida’s immigrant parents Irving and Acela encouraged him to sing during karaoke parties. The teen from Boston, Massachusetts initially wanted to be a Science teacher, but felt that pursuing a career in music was something he would be happy to seriously consider as well.

“That was the voice, to me, of a seasoned professional,” said coach Adam Levine, Maroon 5 front man.

What’s the most important lesson you learned as part of Team Adam?

To just always take the moment a hundred percent, because you have to truly give it your all [for] an amazing performance. And from my other teammates, I learned to feel the song; they also helped me to come out of my shell a lot.

At this point, who do you think would win the competition?

Hard [to say]. I’m supporting Team Adam, but I’m also supporting Koryn (Hawthorne, from Team Pharrell), because I became close to her in my last couple of days in the competition. And I just think she’s really talented.

What do you think contributed to your elimination?

I think I was eliminated because… personally, I didn’t think that, vocally, my performance was perfect. I think that led to people not voting as much as I would like. Overall, I’m just proud that I came out of my shell with my performance.

How much Filipino culture are you exposed to?

A lot. In school, I’m part of the Filipino Club, where we dance the tinikling and other Filipino dances. I’m also surrounded by Filipino people, family and friends. I’m really familiar with Filipino-American culture.

What type of music do you see yourself making?

I’m drawn to R&B and hip-hop, and that’s because I grew up listening to a lot of that on the radio. As an artist, I’d like to make R&B music, similar to what Justin Timberlake or Usher makes.

What advice would you give younger singers about joining contests?

They should always seize whatever opportunity they are given. If I never replied to the YouTube message [asking] me to audition, I would never have reached the Top 20. Just go for it and do your best!

HBO Asia has released the first episode of the new season of “Silicon Valley” on www.hboasia.com and www.youtube.com/HBOAsia for audiences in 19 Asian territories. It is viewable for two weeks. The 10-episode second season regularly airs Mondays, 10 a.m. and 10 p.m. on HBO.

‘Say Yes to the Dress: Atlanta’

The reality show that follows a bride-to-be’s search for the perfect dress continues with an eighth season. “Say Yes to the Dress: Atlanta” airs Thursdays, 7 p.m. on Diva, starting today.