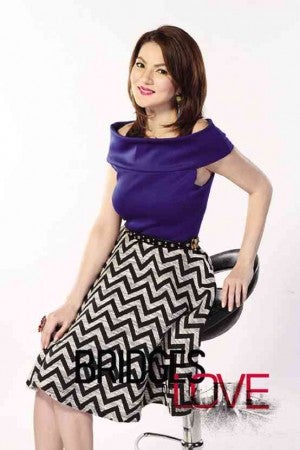 Carmina Villarroel doesn’t allow her kids to watch her TV drama series because of its sensitive and mature theme. As Alexa Meyers in “Bridges of Love,” she is attracted to a younger man, Carlos (Paulo Avelino).

Carmina insists she had to do the highly publicized kissing scene with Paulo for Alexa to come alive. The actress explains, “She was hurt badly in a previous romance. She sees Carlos as her savior.”

The series is about two brothers, Gael (Jericho Rosales) and Carlos, who are separated by tragedy. Their love for one woman, Mia (Maja Salvador), brings them together.

Carmina is not allowing her twins, Cassandra and Maverick, 14, to watch “Bridges” not only because of her “intimate scenes” with Paulo but also because of the kind of job Mia has. “She’s a star dancer in a club,” Carmina says. “I wouldn’t know how to explain what women like Mia do and why.”

She’s not judging these women, Carmina, 39, stresses. “This happens in real life. But should I expose the children to it this early? I have not discussed that with Zoren (Legaspi, her husband). If ever, we’d like the kids to hear the details from us first.”

Carmina didn’t have to ask Zoren’s permission to do the kissing scene with Paulo because, she says, “We respect and trust each other. Plus, I’m an actor. I have to continue challenging myself. Viewers are intelligent enough to know this is just a role.”

Unlike Alexa, Carmina says, she never got attracted to a younger guy. But she admits that she found Paulo (not the character) “mysterious, someone you’d want to know better.”

The kissing scene was shot on their first day at work. “We were both uncomfortable,” Carmina recalls. But Paulo was “such a gentleman, very respectful. He kept asking if it was okay to touch me here or there—I appreciated that.”

There will be no bed scenes for them, she clarifies. “What I know is that Carlos will fall in love with Mia, and this will be a big problem for Alexa.”

She likes how the show is written, Carmina says. “The characters are very human and relatable. They do things only because they are reacting to situations—much like the way we handle situations in life.”