Padilla issued the appeal on his Instagram account after Pamaran slapped Mendez with a P3-million damage suit despite Mendez’ apology and statement that she wanted to move on from the incident. 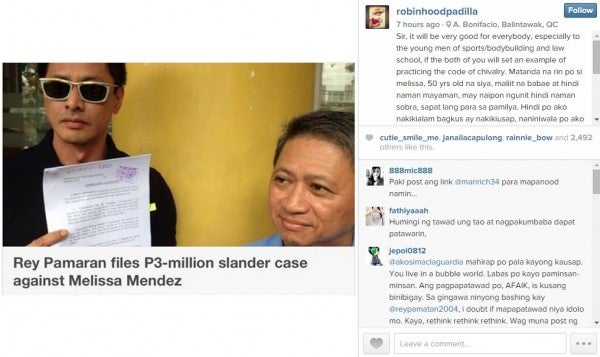 “Sir, it will be very good for everybody, especially to the young men of sports/bodybuilding and law school, if the both of you will set an example of practicing the code of chivalry. Matanda na rin po si Melissa, 50 years old na siya, maliit na babae at hindi naman mayaman, may naipon ngunit hindi naman sobra, sapat lang para sa pamilya,” the caption of Padilla’s Instagram post read.

(Sir, it will be very good for everybody, especially for the young men of sports/bodybuilding and law school if both of you will set an example of practicing the code of chivalry. Melissa is old already, she’s 50, quite fragile and not wealthy. She may have some money, but nothing in excess, only enough for her family.)

(I am not intervening, but only requesting; I believe you two are honorable people who do not back down from fights, but Melissa has already asked for your forgiveness. It’s clear that she no longer wants to fight. It is the Katipunan’s prayer for an end to this misunderstanding and that this may serve as a lesson to those who ride planes, whether they are a man or a woman. The group of peaceful revolutionaries will be indebted for your forgiveness of Melissa Mendez.)

After rejecting Mendez’ apology, Pamaran has filed a slander complaint against the actress.

Lawyer Raymond Fortun, legal counsel of Pamaran, has said that his client is suing because of the humiliation that he received at the hands of Mendez while onboard a Cebu Pacific plane.

Fortun, in a text message to INQUIRER.net, said that Pamaran “wanted to pursue the case.”

He said that his client sued Mendez “because of the lies she made in an afternoon talk show that depicted him in a negative light.” NC/ID

Read Next
RISINGSTARS from all over the Philippines
EDITORS' PICK
Countries with confirmed cases of coronavirus
Get exciting deals and discounts when you download the new McDonald’s App
China expands lockdown against virus, fast-tracks hospital
‘A greener, cleaner tomorrow’: A how-to guide for Filipinos who want to help with today’s energy crisis
SM continues to send relief assistance to remote towns in Batangas
FlipTop rapper Loonie freed on bail
MOST READ
Taal’s sulfur dioxide emission increases
No time for revelry; Tagaytay instead plans for alert level 5
Megan Young, Mikael Daez get married
Palace: US Senate move also made Duterte junk VFA
Don't miss out on the latest news and information.