N. Korea warns against airdropping DVDs of ‘The Interview’ 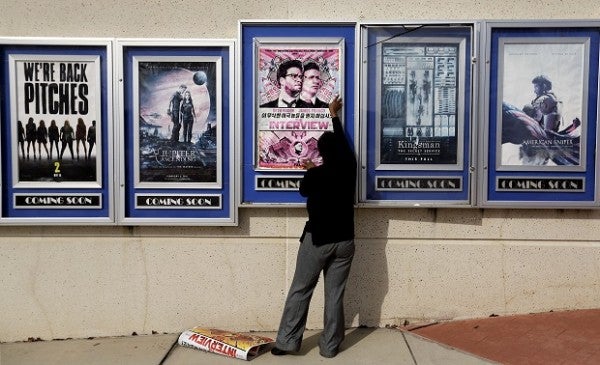 A poster for the movie “The Interview” is taken down by a worker after being pulled from a display case at a Carmike Cinemas movie theater, Wednesday, Dec. 17, 2014, in Atlanta. AP FILE PHOTO

SEOUL — North Korea’s military on Sunday threatened to blow up balloons that South Korean activists plan to send over the heavily-militarized border carrying 10,000 DVDs of the satirical Hollywood film “The Interview.”

Activists plan to launch copies of the film — a comedy about a fictional CIA plot to assassinate North Korean leader Kim Jong-Un — as well as 500,000 propaganda leaflets across the border on or around March 26.

Pyongyang has long condemned such balloon launches and threatened retaliation, and local residents have complained the activists are putting their lives at risk by making them potential targets.

“All the firepower strike means of the frontline units of the (Korean People’s Army) will launch without prior warning… to blow up balloons,” the North’s frontline military units said in a notice to the South.

It said the launch would constitute “the gravest politically-motivated provocation” against North Korea and “a de facto declaration of a war,” according to Pyongyang’s official Korean Central News Agency.

The move is aimed at “deliberately escalating tension on the Korean peninsula where the situation has reached the brink of a war due to… joint war rehearsals” by South Korea and the United States, it said.

The South’s military said it would retaliate if the North opens fire on its territory.

But the North’s notice warned that any challenge to its “just physical countermeasures” will trigger “merciless retaliatory strikes.”

South Koreans living near the border are “recommended to evacuate in advance for their safety” if the balloons are launched, it said.

The launch will mark the five-year anniversary of the sinking of a South Korean warship in 2010, with the loss of 46 sailors. The South pinned the blame on the North and effectively froze trade and investment ties.

The warning came even after South Korea’s Unification Ministry on Friday vowed to take steps preventing the launch in order to protect local residents, saying there is a “limit” to freedom of expression.

Seoul insists the activists have a democratic right to carry out such launches, but has appealed for restraint to avoid overly provoking the North

The activists remained tight-lipped about the exact location and time for the launch.

In October last year North Korean soldiers attempted to shoot down some balloons, triggering a brief exchange of heavy machine-gun fire across the border.

3 things to know about new US sanctions on North Korea