Pres. Aquino to Kris: Be nice to Pia Wurtzbach 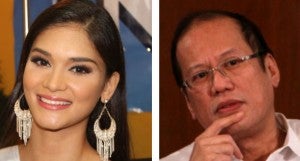 In an Instagram post, Kris also poked fun at her brother, saying that the chief executive was “kinikilig.”

“On my way to Buzz. I was able to force one of my siblings to pose w/ me. Why? Because the 1 in the middle (Aquino) said “Be nice” to one of our guests later,” Kris said in an Instagram post on Sunday.

The presidential sister even included the hashtags #kinikiligkuyako and #butipasiya in the photo’s caption.

During her interview on The Buzz along with other Binibining Pilipinas titleholders, Wurtzbach clarified that she has nothing to do with the President’s directive to his sister.

“Nung nakita ko ‘yung [teaser], sabi ko ‘Ay hindi tungkol sa pagkapanalo ko (When I saw the teaser, I told myself, ‘This is not about my victory). I was preparing myself for the questions already and then I told him na — well I didn’t say to him to tell you to be nice to me. That didn’t come from me,” Wurtzbach said.

In a recent interview, Wurtzbach did not directly answer if she is dating the 55-year-old bachelor president.

However, she said that the chief executive is “very fun to talk to.”

Kris said that she is happy for her brother and that he has every right to feel loved. AJH