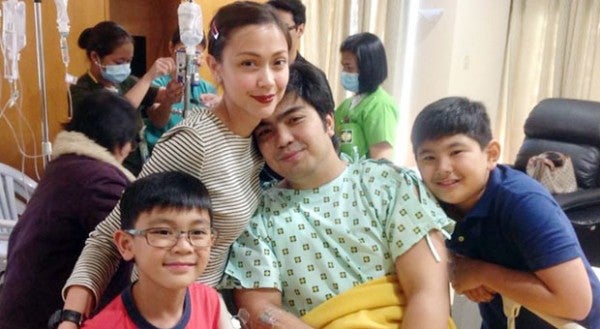 Jolo Revilla and girlfriend Jodi Sta. Maria with their kids from previous partners at the hospital. PHOTO from Lani Mercado’s Facebook

MANILA, Philippines — Cavite Vice Governor Jolo Revilla will take a 30-day leave to recuperate from the injuries he sustained from “accidentally” shooting himself.

“He has asked for a 30-day leave from the Province of Cavite after which, he is expected to report back to work barring any further complications from his injuries,” a statement released on Monday from the Office of Sen. Ramon “Bong” Revilla Jr. read.

On Sunday, Revilla was discharged from the Asian Hospital and Medical Center in Muntinlupa City.

Lawyer Raymond Fortun, spokesman for the Revilla family, said that Jolo will continue his recovery at his mother’s home.

Jolo, a son of jailed Sen. Revilla, was brought to the hospital last February 28 when he “accidentally” shot himself while cleaning a .40 Glock handgun.

“He was discharged around 7 p.m. He will be recuperating and under the care of his mother (Lani) at the latter’s house in Alabang,” Fortun said.

According to Fortun, Jolo could go back to work after three to four weeks of rest.

Meanwhile, the Revilla family also expressed gratitude to the Sandiganbayan for allowing detained Senator Bong Revilla to visit his son while he was in the hospital.

“The family is grateful to the Sandiganbayan for allowing Sen. Bong Revilla to visit Jolo. That visit lifted up Jolo’s spirits which led to a marked improvement in his disposition that very night,” the statement added. AJH, with a report from Bayani San Diego

‘I made a mistake’ says Jolo Revilla on ‘accidentally’ shooting self