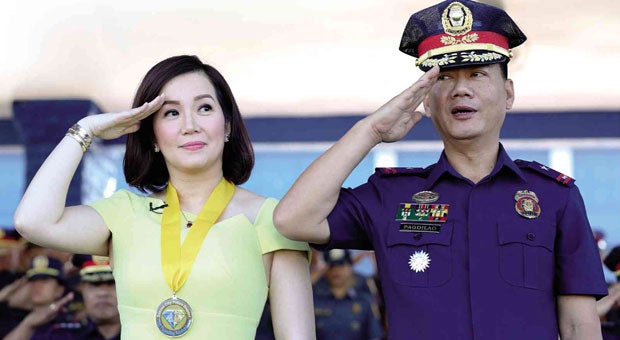 MANILA, Philippines–You may be the most powerful man in the Philippines but in times of trouble, you may find no better defender than a woman—especially if that woman is your sister and she is Kris Aquino.

Besides defending President Aquino, the popular TV host and film actress also spoke about her failed romance with Quezon City Mayor Herbert Bautista, in a speech at Camp Karingal in Quezon City.

Bautista was not present at the ceremony.

Kris spoke also of her efforts to lobby for increases in the pay of policemen, saying it was her right to engage in such a lobby because she stands to pay “more than P50 million” in income taxes.

Invited on Monday to speak at the flag ceremony of the Quezon City Police District (QCPD) to mark National Women’s Month, Kris came to her brother’s defense following the botched police operation against Moro rebels in Maguindanao province, where 44 Special Action Force troopers were killed.

“The past month has been one of the most difficult and painful in his almost five years as President,” Kris said. “It was a difficult time for all of us and there were nights I’d be crying while texting with my Kuya.”

Kris said that once, she even saw a post online in which her brother was “photoshopped inside a coffin.”

“I told my brother, ‘It’s hard to stay silent when your loved ones are being shamed,’” she said. “My brother’s answer was simple: ‘Kristina, once the truth comes out, they will stop,’” she said in Filipino.

Kris also said: “I can strongly say that my family will not be divided. We are a family that loves one another. And with my head held high, I can boast that my brother is faithful, humane, not abusive, humble, sincere and above all else, trustworthy.

Kris said the President wasn’t perfect and pointed out that, among other things, her brother had “expanded the nation’s treasury” and had “never pocketed any of it.”

The actress drew applause when she said: “I’m here because you must like me, because you invited me. If you like me, then that must mean, at least, I’m praying that you must still like and respect our President.”

Addressing the policemen, the President’s sister reminded them to value their mothers and their wives.

“I am here to remind you to love your mothers,” she said. “Call them after this ceremony to thank them because you are what you are today—men of dignity, discipline and honor—because of the love, caring and nourishing they showered you with.”

She quipped: “There’s nothing wrong with being a mama’s boy.”

Kris also urged the married policemen to be faithful.

“Your wives sacrifice greatly for you. They worry about your safety, they adjust their schedule, they take care of you and your kids, and keep the house running efficiently and happy,” Kris said.

Then she threw an arrow: “Don’t add to their stress by philandering.”

Addressing the wives in the audience, Kris reminded them to “take care of yourselves.”

“If you take care of yourselves, you will have no reason to be jealous,” she said.

Kris also paid tribute to the women of the QCPD, complimenting Public Information Office head Senior Insp. Maricar Taqueban for being “informative and pleasing on TV” when she interviewed her on her television show.

As her “thank you” gift to the Quezon City force of more than 3,200 policemen, Kris said they needed only to show their IDs at her Chowking fast-food branch in Ali Mall in Cubao and they and their partners would get free halo-halo (a Filipino dessert) until Easter Sunday.

“I am a Quezon City resident and business owner and I am very appreciative of your hard work and dedication,” she said. 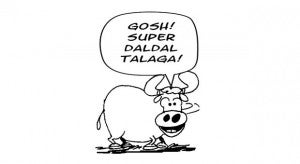 Kris also briefly talked about her abortive relationship with Mayor Bautista. In fact, it was her opening salvo in her speech.

“I’m here super-early on a Monday even if I received this invitation just two days ago, not because I want to tell on (isusumbong) your Mayor, who broke my heart,” Kris said, prompting a burst of laughter from the assembled policemen.

“Too bad, if we had stayed together, I would have initiated big programs with the private sector to help QCPD, most especially your spouses and children. But oh, well. Let’s move on,” Kris said, in jest.

In her speech, Kris said she had asked Sen. Antonio Trillanes IV regarding police salaries since her brother took office.

Quoting Trillanes’ SMS messages to her, Kris noted there had been wage increases over the years with the implementation of the Salary Standardization Law 3.

She said Trillanes told her about his proposed bill seeking to increase the base pay of government employees, including uniformed personnel.

“I will be persistent in trying to convince P-Noy regarding Senator Trillanes’ bill, at least, for them to meet halfway the proposed increase,” she said.

“After all, I have a right to lobby for where my taxes will go,” she added. “For my 2014 income tax alone, I will pay more than P50 million. So you know I contribute to your wages, and I am proud to do that.”

After her speech, Kris was asked by reporters about her recent blog entry detailing her failed romance with Mayor Bautista. Kris said she wrote the blog for “closure.”

“With women, a closure is needed,” she said. “That’s my version of closure.”

Asked what lesson she hoped to impart with her blog entry, Kris said: “Be a good sport. I’ve had my share of hearts that I’ve broken so it’s about even that my heart should also get broken.”

Kris also said one of her advocacies was to provide more jobs for women.

“If a mother has her own source of income, her children will not go hungry, the family will not suffer,” she said, adding she learned this from her late mother, former President Cory Aquino.

“Our mother was our strength, our shield and our protector. That’s why I’m here in front of all of you today. Because I am a product of a woman of courage,” she said.

Kris Aquino tells detractors of brother: ‘You cannot bring us down’

Kris on failed romance with Herbert: ‘It’s fair for my heart to be broken’