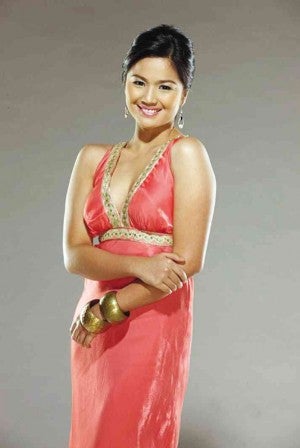 Is it true that Ynna Asistio is Derek Ramsay’s new squeeze? I heard that Derek often fetches Ynna from school. Or are they just “whatchamacallit” friends?

The rom-com “That Thing Callled Tadhana” touched me in all the right places. Just like any hit movie, it all boils down to good storytelling.

With a solid script as seed, actors bloom. Such is the case with “Tadhana,” which top-bills Angelica Panganiban and JM de Guzman.

That’s why I became an instant fan of writer/director, Antoinette Jadaone. She tells it like it is—no pretenses, no sugarcoating. The film shows that we can find “happily ever after” even without a fairy-tale romance.

Here’s my tête-à-tête with Antoinette:

What prompted you to write “Tadhana”?

I wanted to tell a love story that’s as close to real life as possible. While watching it, you tell yourself: That’s me!

In film school, I was taught: Show, don’t tell. In “Tadhana,” I challenged myself to do the opposite: Tell, don’t show.

How can a woman share her heartaches and lost dreams to a stranger? Just by talking, right? No benefit of flashbacks, no re-enactments, no musical score—just as it happens in real life. I wanted to capture the rawness and sincerity of a broken heart.

“To the great people we will be!”

How do you handle writer’s block?

I watch a movie.

Got tips for aspiring writers?

Watch films! More importantly, watch Pinoy films in different theaters so you will know and understand your audience well.

Any interesting anecdotes about JM and Angelica during the shoot?

JM was nervous during the shoot in a bar in Baguio—that scene where he shares his own heartbreak. Angelica was joking around, “We should have hired another actor.” JM got more tense, but he had prepared well for that scene. When the camera started rolling, he was so good… and did it in one take.

The last scene we shot was the one on a sidewalk, in front of a Japanese restaurant. That was Angelica’s highlight. We couldn’t talk to her the whole day. She memorized the entire 12-page sequence. After the first take, I asked for different emotions. She delivered each time. She knew her character that well.

Do you have a muse when you write?

No. But I think of a friend… so I can base the character’s reactions on real life.

How are you handling your newfound fame?

I have a long way to go.

What is your next project?

A rom-com with Toni Gonzaga and Coco Martin, for Star Cinema.

If your life were made into a movie, what would the title be?

“Based on a True Story.”

Any quirks as a writer?

Ishmael Bernal. He’s my idol. Write lang? Can I also direct the film?

Judy Ann Santos and I were chatting recently and she mentioned the coming Goldilocks Cake Decorating Challenge.

I can’t believe that this groundbreaking activity is already on its ninth installment. Since the first year, I have been an avid fan of this contest, which pits university students in a contest to create the most amazing cake designs on-the-spot.

Juday will join fellow endorser Jasmine Curtis-Smith in the cake challenge on March 7 at the SM Mall of Asia. Congratulations in advance to my Santa friend Alan German, Dianne Carcallan, and Goldilocks marketing director Cherry Caluya.

Belated happy birth anniversary to my friend with a heart of gold, Butch Raquel.