Will Smith enters a new phase, learns to ‘quiet the warrior’ 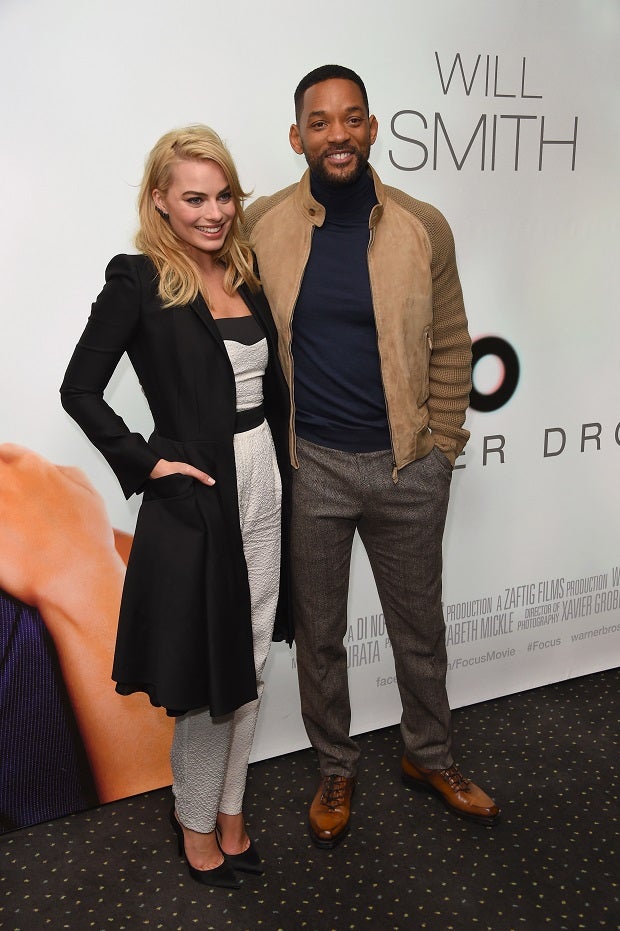 Actors Margot Robbie and Will Smith pose for photographers in this Wednesday, Feb. 11, 2015 file photo, at the screening of Focus, at a central London cinema. Once the biggest box office star in the world, after the failure of the big budget After Earth, Smith has entered another phase in his career and life where box office results dont define him. First up is Focus, a character study about a con-man and his young protege, played by up and comer Robbie. AP

LOS ANGELES, United States — Things started to come into focus for Will Smith when “After Earth” bombed.

Once the biggest movie star in the world, his $130 million sci-fi spectacle “After Earth” opened in June 2013 to a lousy $27.5 million and would only go on to make up less than half of its production budget, domestically, by the end of its run. For a man who once defined himself by his box office star power, the blow was crushing.

“From the time I was in my early 20s, I had this goal that ‘I want to be the biggest movie star in the world,'” said Smith on a recent afternoon at a suburban Four Seasons Hotel, lowering his voice to a faux-macho level when he says the words “movie star.”

“And I set out for conquer,” he said. “Smash! Conquer!” he exclaimed animatedly.

‘Something broke in my mind’

“After the failure of “After Earth,” a thing got broken in my mind,” he had explained to a group of reporters at a press conference for his new film “Focus” a few minutes earlier.

“I was like, ‘oh wow, I’m still alive. Oh wow. I actually still am me even though the movie didn’t open at No. 1. Wait, I still can get hired on another movie?’ All of those things collapsed in my mind. Mr. July! Big Willie weekend! No. 1! Eight in a row! All of that collapsed and I realized I still was a good person.”

“It’s a huge emotional shift for me,” said Smith, who has since appeared in smaller roles in “Anchorman 2: The Legend Continues” and “Winter’s Tale.”

“(Daughter) Willow in particular has helped me make a shift from winning and conquering to loving and connecting as a primary purpose for everything. She just absolutely demands attention to her thoughts and feelings. It’s a huge lesson for me to quiet the warrior in me,” he said.

It’s fitting that Smith’s first outing in this new stage is actually called “Focus” (in theaters Friday), a sleek, intimate film from “Crazy, Stupid, Love.” directors Glenn Ficarra and John Requa about a smooth, seasoned con-man and his alluring and much younger protege, played by Australian actress Margot Robbie.

Smith and Robbie are meeting in the middle, in film and in life. Smith, in a self-defined new phase, and Robbie right as she’s about to break out into the mainstream.

“The Wolf of Wall Street,” where Robbie caught the attention of a wider audience playing the wife of Leonardo DiCaprio’s character, hadn’t even come out when she was cast in “Focus.”

As she remembers it, “Focus” wrapped at 6 a.m. and she was attending the “Wolf” premiere that night.

“We couldn’t be more opposite,” said Smith of his co-star, seated next to her in the hotel.

“Ooooh. Intellectual, emotional and deep?” he said. “That should be your headline.”

The two have a smoldering chemistry in the film and a playful, giggly way around each other off screen, often finishing each other’s sentences when they’re not making the other keel over in laughter.

They bonded over endless hours of conversation, chess, eating and going out with the cast and crew in the various shooting locations from New Orleans to Buenos Aires.

The elaborate Thanksgiving dinner that Smith coordinated while the cast was in Argentina didn’t hurt either. Smith said the State Department even got involved to ensure they’d have cranberry sauce.

“He pretty much organized and funded the biggest Thanksgiving fiesta that Argentina has ever seen. That any of us have ever seen,” said Robbie. “It’s been over a year now but we’re still talking about it.”

Both credit the directors for making the set as fun and lively as possible, but Smith helps to set the tone.

“For me, it’s really important to maintain a positive energy, especially when it’s a comedy,” said Smith.

“Will walks onto set with a boom box on his shoulder and starts rapping and it’s like 5 o’clock in the morning and he’s jumping up and down and throwing a rave and then you’re just buzzing for the rest of the day,” she said.

Robbie and Smith aren’t done with each other yet, either. They’ll both be appearing in the comic book film “Suicide Squad” for Warner Bros., which is currently in pre-production.

When Robbie heard that Smith was considering taking on the project, she texted him and insisted on it.

“He was like, ‘we’ll see, candy cane,'” said Robbie. “He was my mentor on screen and off screen.”

As far as what that advice is?

“My standard answer for Margot is ‘uh, don’t do that,'” said Smith, laughing. “I’m like, you know what Margot? Take a nap.”