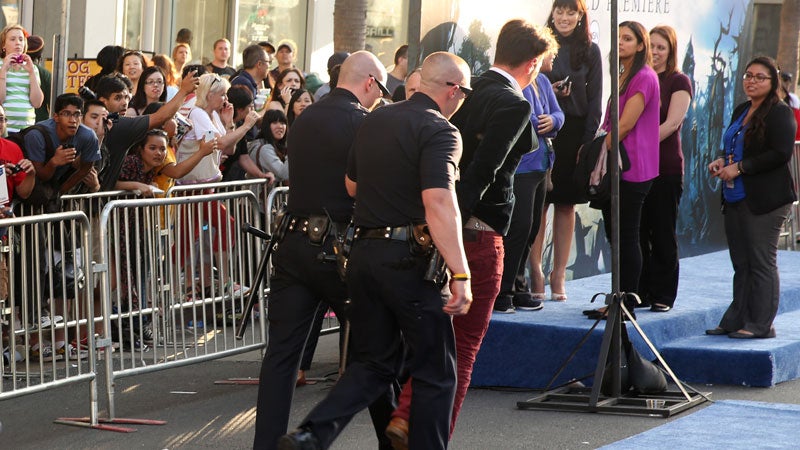 Journalist Vitalii Sediuk is walked off carpet in handcuffs after allegedly attacking Brad Pitt at the world premiere of “Maleficent” at the El Capitan Theatre on Wednesday, May 28, 2014, in Los Angeles. Sediuk’s antics have left him with fewer friends in the entertainment world after his publicist and television station cut ties with him over pranks that have once again landed the 25-year-old in handcuffs. He’s kissed Will Smith in Moscow, tried to steal Adele’s spotlight at the Grammys, dove under America Ferrera’s dress at Cannes and now accosted Pitt on the red carpet of a Hollywood premiere. (Photo by Matt Sayles/Invision/AP)

LOS ANGELES—He tried to kiss Will Smith in Moscow, attempted to steal Adele’s spotlight at the Grammys, dove under America Ferrera’s dress at Cannes and now, police say, accosted Brad Pitt on the red carpet of a Hollywood premiere.

Vitalii Sediuk’s antics have earned him a smack in the face from Smith, probation for the Grammys stunt and have cost him his job with the Ukrainian television station that up until his incident with Ferrera, gave the 25-year-old a platform to cross the line with celebrities.

Sediuk remained in a Hollywood jail Thursday, one day after police say he leaped over a fan barrier and made contact with Pitt, who was signing autographs at the premiere of his partner Angelina Jolie’s latest film, “Maleficent.” Pitt was apparently uninjured, but Sediuk’s conduct has left him alienated from supporters and facing another possible criminal case.

An emergency restraining order has been issued to Sediuk to stay away from Pitt, Los Angeles Police Sgt. Albert Gonzalez said. The order could be extended for a month, but the actor would have to petition a civil judge if he wants the order extended, Gonzalez said.

A case against Sediuk was presented Thursday to prosecutors, who will make the ultimate determination on charges, he said.

Ukranian TV station 1+1 fired Sediuk roughly three weeks ago, around the time he rushed Ferrera and hid under her voluminous dress at the premiere of “How to Train Your Dragon 2” at the Cannes Film Festival. The station’s general director Oleksandr Tkachenko wouldn’t disclose the exact reason for Sediuk’s dismissal.

Sediuk’s antics have repeatedly brought him too close for comfort to Hollywood’s elite. In perhaps his tamest incident, Sediuk presented Madonna with a bouquet of hydrangeas at the 2011 Venice Film Festival, prompting the singer to express her disgust for the flowers. The following year, he attempted to kiss Smith on the mouth on a red carpet in Moscow, prompting a slap from the actor.

The incidents raised Sediuk’s profile and apparently emboldened him to new stunts to attract attention. His grab of the microphone before Adele accepted a Grammy Award at last year’s ceremony led Sediuk to plead no contest to trespassing and earned him a three-year probation sentence.

He hugged Bradley Cooper’s crotch earlier this year at the Screen Actors Guild Awards and streaked down a runway in a G-string at a show during February’s Fashion Week in New York City. No charges were filed after either incident.

Sediuk’s intentions toward Pitt are unclear. He remains jailed in lieu of $20,000 bond, and his attorney Anthony Willoughby said he had not yet spoken to his client. Willoughby said he was surprised by the Pitt incident, which he said could lead a probation violation for Sediuk.

Publicist Christa Scherck, who worked with Sediuk for the past two years and helped him get credentialed for entertainment events, said she was severing ties with him after his arrest. She said she was never aware of his prank plans.

“This goes beyond pranking,” Scherck said. “This is no longer entertaining.”

She said Sediuk did not tell her he’d been fired from 1+1 after the Ferrera incident, but he said his employers were unhappy with him and he was going to lay low.

After his arrest for crashing the 2013 Grammys, Sediuk said he accepted responsibility for his actions but wasn’t sorry for what he did.

He said he was just trying to create interesting reports for audiences back home but had been stymied by publicists. “I just need to get a little access,” he said at the time.

Even without access, Sediuk has proven he can circumvent security and get uncomfortably close to celebrities, but whether that continues remains to be seen.

Will Smith slaps journalist who tries to kiss him