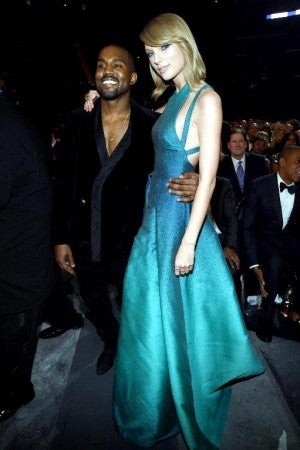 MANILA, Philippines—Six years after rapper Kanye West crashed Taylor Swift’s acceptance speech during the 2009 MTV Video Music Awards, the two were seen being chummy with each other during the 2015 Grammy Awards on Monday (Philippine time).

Entertainment Tonight reported that the two were seen clasping hands and posing for photos.

In 2009, Kanye stormed the stage and aired his sentiment on the VMA snub on Beyonce’s “Single Ladies” for Best Female Music Video as Taylor Swift’s “You Belong With Me” bagged the award.

“Yo, Taylor, I’m really happy for you, I’m [going to] let you finish — but Beyoncé had one of the best videos of all time,” Kanye infamously told a shocked Taylor.

During Monday’s Grammys, Kanye also poked fun at himself by repeating his 2009 VMA act as he tried to interrupt Beck’s speech for winning Album of the Year for “Morning Phase.”

However, in an interview with E! Online after the awards show, Kanye revealed that he has an issue with Beck’s win.

“I don’t even know what [Beck] said. I just know that, the Grammys, if they want real artists to keep coming back, they need to stop playing with us. We aren’t going to play with them no more. ‘Flawless.’ Beyoncé’s video. And Beck needs to respect artistry, he should have given his award to Beyoncé,” the rapper said. AJH