MANILA, Philippines — Canadian crooner Michael Bublé was in this city for the third time to once again perform before his adoring Filipino fans, who according to him were the reason why he made it big in the music industry.

The four-time Grammy winner said the Philippines was the place where he first had success and became famous and that he considers it his home away from home.

“Without you, my life would’ve been completely different,” Bublé told the sold-out crowd during his two-hour concert at the Mall of Asia Arena Saturday night. He added that being popular in the Philippines paved the way for his successful singing career.

The show was opened by the a capella group Naturally 7, which showcased vocal plays to the delight of the concert-goers. The group’s leader said Bublé instructed them to make sure that everybody in the audience was ready for his set.

Soon after the opening act, Bublé emerged from a fiery stage set-up, aptly singing Fever, which he followed up with his 2013 smash hit It’s A Beautiful Day.

Incidentally, after referring to the country as his “home,” the crowd-pleaser Bublé delivered a heartfelt performance of his hugely popular ballad Home. 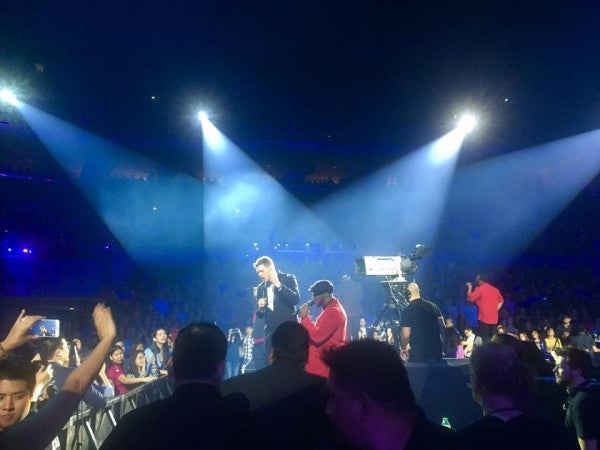 Michael Buble charms his Filipino fans for the third time during his one-night only concert at the MOA Arena Saturday night. DON LEJANO/INQUIRER.net

Among the other hits that he sang were Try A Little Tenderness, Everything, Haven’t Met You Yet, That’s All and Save The Last Dance for Me.

He also had renditions of Daft Punk’s Get Lucky, The Beatles’ All You Need Is Love, and Backstreet Boys’ Everybody.

At one point during the show, Bublé said he learned that the country was going through tough times and so he thought he’d include his own composition, Hold On, in his repertoire. He said he hasn’t sung that song in a long time.

He closed the show with Cry Me A River, the first single from his 2009 album Crazy Love.

He is heading to Seoul and Tokyo for the continuation of his “To Be Loved” world tour, which commenced last June 2013 in London.

Michael Bublé to perform in Manila on Jan. 31